Shell Set to Use Crane Ship Named After Nazi

The ship is named after convicted Nazi war criminal Pieter Schelte Heerema — which has prompted a chorus of outrage among the Jewish community and others. Shell said that it supports a change in the name, but that the ship’s owner — Swiss-based group Allseas Group SA — has refused. 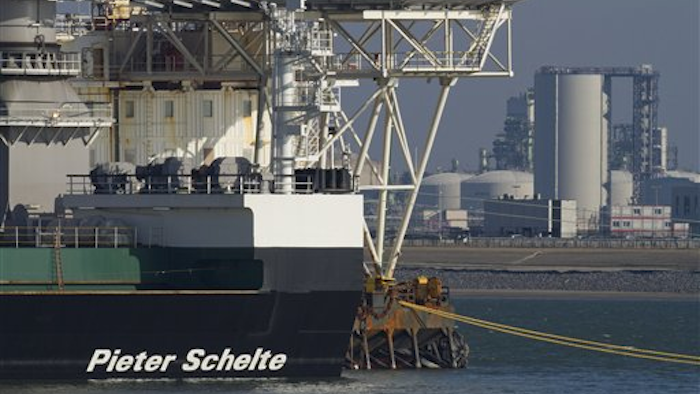 The ship is named after convicted Nazi war criminal Pieter Schelte Heerema — which has prompted a chorus of outrage among the Jewish community and others.

Shell said that it supports a change in the name, but that the ship’s owner — Swiss-based group Allseas Group SA, a pipelayer for the oil and gas industry — has so far refused.

According to Bloomberg, the massive crane ship is “a cross between a ship and a giant, very dexterous robot,” which can be used to both install and remove oil platforms in “remote and inhospitable places.” Shell has also said that the crane ship — which stands higher than the Eiffel Tower — is the only ship capable of lifting the platforms and bringing the 23,500 tonnes of steel to shore for scrapping.

The $1.7 billion vessel has been massively controversial since its name became widely known in 2008, and it had ignited further controversy when it arrived in Rotterdam from the Korean Daewoo shipyards on January 24. But before Friday, it was unknown who would first be utilizing the world’s largest crane vessel.

Jewish groups and others in the Netherlands called on the Dutch government — who had given Allseas’ Netherlands subsidiary a $1 million tax break to build the ship — to condemn the name. Critics pointed out that January 2015 marks the 70th anniversary of the liberation of the Auschwitz concentration camp.

The ship is named after the late father of Edward Heerema, Allseas’ Dutch president. Pieter Schelte Heerema was a convicted war criminal who served in the Waffen-SS alongside then-medical officer Josef Mengele. Pieter Schelte returned to the Netherlands from Venezuela after the country was occupied by Germany, where he had a successful career in the SS, was involved in setting up slave labor operations and called the “Jewish race… parasitic.”

Fred Reurs, spokesman for the respected Netherlands Institute for War Documentation, said, “You have many different kinds of collaborators: some are passive and some are active. This man was prominent, a leader.”

But Allseas has said the ship’s name was a tribute to Pieter Schelte’s contributions to the oil and gas industry. Upon his return to Venezuela after the war, Pieter Schelte became successful in the world of offshore oil. He is credited with innovations in semi-submersible crane vessels for work in rough seas, and he became a multimillionaire and member of Dutch inner circles. Despite his success, questions about Heerema’s past followed him until his death in 1981.

Esther Voet, director of the Dutch Centre for Information and Documentation on Israel, has lead the re-naming campaign in the Netherlands. "This is a bloodstain on the name of Royal Dutch Shell," she said.

Meanwhile, plans to use the ship are full steam ahead. Shell has decided to decommission its famed Brent oilfield platforms as ouput has dwindled. While the field at its peak once produced half-a-million barrels a day, Shell said it is now “close to the end of its life.”

This comes amidst the almost 60 percent fall in the price of Brent crude in the last seven months.