While already the world's third-largest emitter of carbon dioxide, a potent greenhouse gas, India is still home to at least 300 million people with no electricity at all, while hundreds of millions have just a couple of hours a day. Bringing them all onto a 24-hour electricity grid fueled primarily by coal could jeopardize global efforts to prevent the worst effects of climate change. 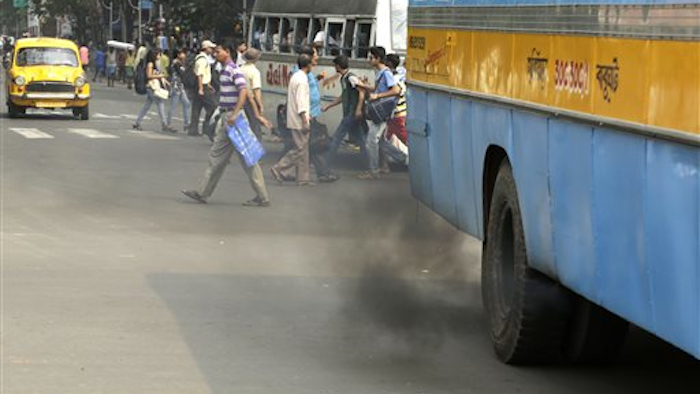 NEW DELHI (AP) — Prime Minister Narendra Modi on Monday blamed the changing lifestyles that have come with India's economic development for rising pollution levels that have given the country some of the world's dirtiest air.

With his government rolling out a new air quality index to 10 of the nation's cities, Modi urged Indians to curtail waste and conserve resources even as they become wealthier, in order to prevent an environmental catastrophe.

"Until we focus on our lifestyle and get the world to focus on it, we will not succeed despite all other measures being taken," Modi told state environment ministers in New Delhi.

"It is difficult to convince the developed nations about this," he added, but said India should set an example.

Air pollution kills millions of people every year, including more than 627,000 in India, according to the World Health Organization.

India announced plans last year for the air quality index, releasing a draft proposal in October based on New Delhi's small network of air quality monitors. Experts have criticized New Delhi's readings as erratic and unreliable, calling for more transparency and rigor in the data.

They also said using an air quality index in 10 cities was a welcome step for raising public awareness of pollution dangers, but was still far below what is needed. The WHO puts 13 Indian cities in the world's 20 most polluted — with New Delhi deemed the filthiest — while pollution levels even in the countryside are often several times above what is deemed safe.

Environmental activists said the index had little value without offering advice on how to cope with high pollution levels, or announcing any measures to reduce pollution.

"Given the scale of air pollution and the impact it has on the public in Delhi and many other cities across the country, we had expected the government to address the issue with more rigor and responsibility," Greenpeace said in a statement.

The index — a simple ranking of pollution over a 24-hour period as good, satisfactory, moderately polluted, poor, very poor or severe — will be used New Delhi, Agra, Kanpur, Lucknow, Varanasi, Faridabad, Ahmedabad, Chennai, Bangalore and Hyderabad. A few of the cities, however, have just one air monitor. New Delhi has 20 in operation, but even that is deemed very low.

The index's scale may also downplay pollution levels. For example, Monday's pollution level at the U.S. Embassy in central Delhi was described as "moderately poor" on the Indian scale. But that same level is considered "unhealthy" by the U.S. Environment Protection Agency.

"It is time to push for aggressive and time-bound action in Delhi and other Indian cities to meet clean air standards and reduce the public health risk," said the Delhi-based Center for Science and Environment, a research and lobbying group.

Already, many of New Delhi's 4.5 million children have reduced lung capacity, according to a study by the Chittaranjan National Cancer Institute of Kolkata submitted to India's Central Pollution Control Board two years ago — yet made public by Indian media only last week. The researchers found that, out of about 11,000 children studied over years, one-third showed lung disease or deterioration.

"By 35, you tend to have lungs which start behaving like a smoker's lung," says Dr. Pankaj Syal, a lung specialist at PSRI Hospital in the capital. "Not only are the cases rising, we are having difficulty controlling patients' (cases) which were easily controlled earlier on."

India's air pollution comes mostly from coal-fired power plants, crop burning, domestic cooking with firewood or cow dung, and vehicles burning diesel fuel. The incomplete burning of these fuels produces black carbon, which constitutes most of the tiny particulate matter known as PM2.5, and can lodge and fester in human lungs. Black carbon is also blamed for up to 20 percent of global warming.

Modi also complained that other nations were thwarting India's clean-energy ambitious by not selling it nuclear fuel.

"See the irony," Modi said. "The world gives lecture on climate, but if we tell them that we want to move forward in nuclear energy as it's a good path for environment protection, and when we ask them to provide necessary fuel for nuclear energy, they refuse."

India's lack of progress in building nuclear capacity, however, is largely a result of its reluctance to allow U.S. tracking of fissile material as well as its law making U.S. nuclear suppliers — not operators of nuclear plants — liable for accidents. Modi's government has been discussing ways to placate those concerns.

The country's planned coal expansion will at least double sulfur dioxide levels, along with those of nitrogen oxide and lung-clogging particulate matter, according to a study published in December by Urban Emissions and the Mumbai-based nonprofit group Conservation Action Trust.

It remains unclear how India plans to keep pollution from escalating further. It still has no regulations for pollutants like mercury or sulfur dioxide, a carcinogen that causes acid rain and respiratory illness, while both coal-plant emissions and vehicle fuel standards remain below Western norms.

And while already the world's third-largest emitter of carbon dioxide, a potent greenhouse gas, India is still home to at least 300 million people with no electricity at all, while hundreds of millions have just a couple of hours a day. Bringing them all onto a 24-hour electricity grid fueled primarily by coal could jeopardize global efforts to prevent the worst effects of climate change.

Modi suggested Indians would have to be more energy efficient in order to disprove international perceptions that it did not care about the environment.