The nation's worst coal mine disaster in decades exposed lax safety measures at some Appalachian mines, issues that persist five years later despite the crackdown that followed, according to an Associated Press review of federal inspection records. 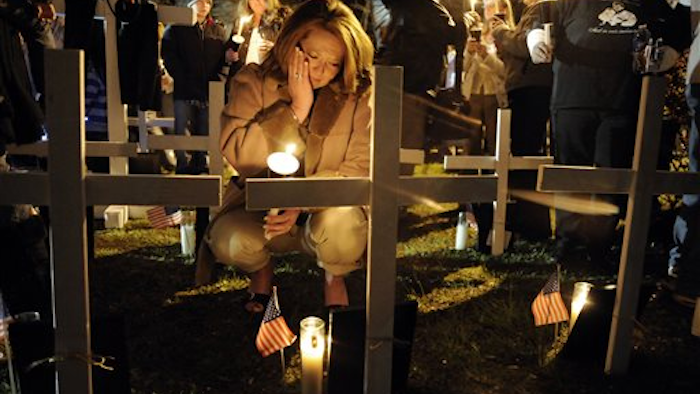 CHARLESTON, W.Va. (AP) — The nation's worst coal mine disaster in decades exposed lax safety measures at some Appalachian mines, issues that persist five years later despite the crackdown that followed, according to an Associated Press review of federal inspection records.

Excess methane gas and flammable coal dust fueled a fireball that raced through the Upper Big Branch mine in southern West Virginia on April 5, 2010, killing 29 men. The explosion and mass casualties rocked the mining community, which had just recorded its safest year ever in coal mines.

The revelation that inspectors repeatedly had cited the mine for buildups of coal dust and methane, with little disruption to the mine's operations, drove calls for greater accountability. Federal authorities responded by stiffening safety rules, stepping up inspection raids and going after company higher-ups.

Prosecutors have won four convictions against former officials at Massey Energy, the company that owned Upper Big Branch, and secured a rare indictment on conspiracy charges against Don Blankenship, the former CEO. He has pleaded not guilty and is set for trial April 20.

In 2014, the nation again set a new low for coal mining deaths — 16 — in part because about a hundred underground mines have closed in West Virginia and Kentucky over the last five years as the energy industry has moved away from Appalachian coal.

The U.S. Mine Safety and Health Administration also credits its revamped approach to inspections. After Upper Big Branch, MSHA began sending teams of inspectors to target problem mines, many of them underground operations in West Virginia and Kentucky, which are still home to nearly half of the nation's coal mines. Federal inspectors have written nearly 14,000 citations during those visits, called impact inspections.

MSHA chief Joe Main has said the increased enforcement has reduced serious violations that could lead to injury or death by about 60 percent in mines that MSHA has kept a close watch over since 2010.

Yet some mines consistently fail to follow rules meant to curb explosion risks, including some owned by the company that took over Massey's operations.

In January, federal officials found excess methane and coal dust at Mill Branch Coal Corp.'s Osaka mine in Wise County, Virginia. The mine is owned by Alpha Natural Resources, which bought Massey's mines in 2011. During the visit, inspectors pulled miners out of two working sections, temporarily shutting down production. The January visit to Osaka was the fifth impact inspection at the mine.

At another Wise County mine in November, inspectors found 2-foot deep accumulations of combustible materials and coal dust in working areas of Regent Allied Carbon Energy's No. 2 mine. MSHA ordered the belt lines shut down since the mine had not followed an approved ventilation plan, and officials noted that the water supply to sprayers that suppress coal dust were not turned on.

A worker at the Regent Allied mine referred questions to company president Ervin Stiltner, but calls to two numbers listed in his name were not answered.

MSHA named six more mines in an August report that have had repeated problems meeting ventilation and dust control standards since Upper Big Branch. Five are in West Virginia and one is in eastern Kentucky.

"You just have to shake your head and wonder what in the world are these mines doing?" said Celeste Monforton, a former MSHA official and a member of a special investigative panel that compiled a report on Upper Big Branch for the West Virginia governor.

The fact that some mine operators continue to create conditions similar to those at Upper Big Branch should "really send chills up peoples' spines, knowing that these situations are still occurring," she said.

As with many regulatory agencies, MSHA's enforcement powers are limited. It can levy fines and temporarily shut down a mine, but getting a mine closed for good requires asking a federal judge. MSHA has almost never taken it that far.

Data provided by MSHA indicates a crackdown in West Virginia on ventilation and combustible material problems after Upper Big Branch. Federal inspectors wrote an average of about 700 more of those citations annually from 2010 to 2014 than they did in the five years before the tragic explosion. West Virginia has about 30 fewer underground coal mines operating today than in 2010. For all U.S. coal mines, those same types of citations and orders decreased after Upper Big Branch, as MSHA wrote about 1,500 fewer per year from 2010 to 2014 compared to the five years before.

Other mines found to have explosion risks have recently shown safety improvements.

Another Alpha-owned operation, the Camp Creek underground mine in Wayne County, West Virginia, had been cited 64 times in the last two years for failing to follow its ventilation plan, MSHA said last year. The vent plan is designed to keep air moving and flammable gas from concentrating underground.

Bristol, Virginia-based Alpha said that Mill Branch and Rocksprings Development, which runs the Camp Creek mine, addressed the problems found during the impact inspections. A follow-up impact inspection in November at the Camp Creek mine, a huge operation with 400 employees, ended with three citations, an improvement over the problems found in August.

"Alpha's affiliated operations receive mine inspections almost daily and take nothing more seriously than safety," the company said in an email to the AP.

After acquiring Massey's mines, Alpha agreed in 2011 to pay $210 million to compensate the victims' families, pay for safety improvements and settle years of Massey fines.

The ventilation plan problems cited in recent inspections were also a problem at Upper Big Branch, as contaminated air stagnated where miners worked. Gas in the mine forced workers out from underground the day before the explosion, Pam Napper recalled. She got a call from her son Josh that day, after he left the mine.

"I could just tell he was really thinking about something really hard," Napper said. "Apparently he knew something was going on but he wasn't sure what it was all about."

The next day, sparks from machinery cutting into rock ignited gas in the mine. Water sprays on the machinery were defective, meaning the flame wasn't immediately put out. The fiery blast moved through the mine, growing as it touched flammable coal dust that had built up in underground shafts.

When it was over, Josh Napper and 28 other miners were dead.

It was a staggering number, the highest death toll in an American mine since 1970.

Three hundred feet underground when it happened, Stanley "Goose" Stewart later recalled trying to revive some of his fallen co-workers, then covering their bodies with blankets, their faces obscured by black soot.

"It's always in the back of your head, and often times it comes to the front of your head," said Stewart, who retired shortly after.

The mine, he told Congress during an investigation, was a "ticking time bomb."