Trial Begins Over Turkey's Mine Disaster That Killed 301

Inspection reports said the coal had been smoldering for days before the May 13 disaster, releasing toxic gases. Survivors have complained of poor working and safety conditions inside the mine, including a lack of gas masks. 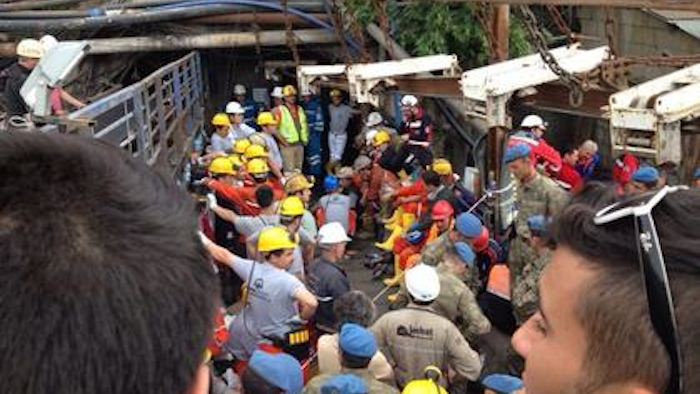 ANKARA, Turkey (AP) — Forty-five managers and employees of a mine in the western Turkish town of Soma, went on trial on Monday accused of causing the deaths of 301 miners who perished in a fire last

The opening hearing of the trial was tense with lawyers and families of the victims protesting authorities' decision that eight of the jailed defendants — the main suspects in the proceedings — should not attend the trial over security concerns. The court called a recess and then adjourned until Wednesday, demanding that the eight defendants be present at the next hearing, the state-run Anadolu Agency reported.

The main defendants include the CEO and the general manager of mine company Soma Komur Isletmeleri A.S., who have been charged with "probable voluntary manslaughter" over the 301 deaths and causing "bodily harm" to 162 people who came out of the mine with injuries. They face up to 25 years in prison for each of the victims and an additional six years for each injured.

Thirty-seven other people have been charged with negligent death and injury and face up to 15 years in prison.

The U.S.-based Human Rights Watch advocacy group has welcomed the trial as a step toward justice for the victims of the mine but has also called for an investigation into state officials for failing to oversee safety measures inside the mine.

The court on Monday also demanded that it be informed of any possible investigation into state employees who may be responsible for the disaster, Anadolu reported.

Inspection reports said the coal had been smoldering for days before the May 13 disaster, releasing toxic gases.

Survivors have complained of poor working and safety conditions inside the mine, including a lack of gas masks.

The trial is being held in a cultural center in the town of Akhisar, near Soma, which has temporary turned into a courthouse.