Up to nine miles of coastline in Santa Barbara have been transformed. 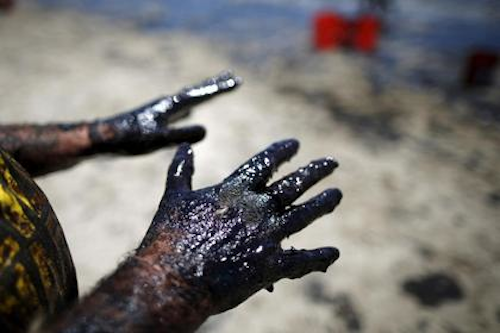 Up to nine miles of coastline in Santa Barbara have been transformed in recent days after 105,000 gallons of oil spilled from a ruptured pipeline over a period of three hours. Officials estimate that about 20,000 gallons of the gooey black oil made it to the sea, while the rest stayed on land.

About 300 local and federal responders have been on the scene and working to haul as much oil as possible from the ocean in buckets. But so far, their efforts have only mopped up about 7,000 gallons of the spilled oil in the ocean.

The company responsible for the spill has been identified as Plains All American Pipeline. The company’s CEO apologized for the accident and promised to stay on the scene until the cleanup is complete. But there’s been no word on how long that might take.

Ironically, a similar spill from a blowout on an oil platform happened on the same stretch of beach in 1969. Because of the devastation to sea life from that incident — it unleashed several thousand gallons of oil and killed thousands of seabirds and marine animals — it is credited with launching the environmental movement in the U.S.

As environmentalists now work to assess the damage from this latest accident, the ill effects of marine life are already becoming clear.

Reuters and The Associated Press have been on the scene capturing the stunning images shown here.