The woman who had been hanging off the anchor chain of a support ship that is part of Royal Dutch Shell's plans to explore for oil in the Arctic Ocean ended her dayslong protest north of Seattle on Monday morning. 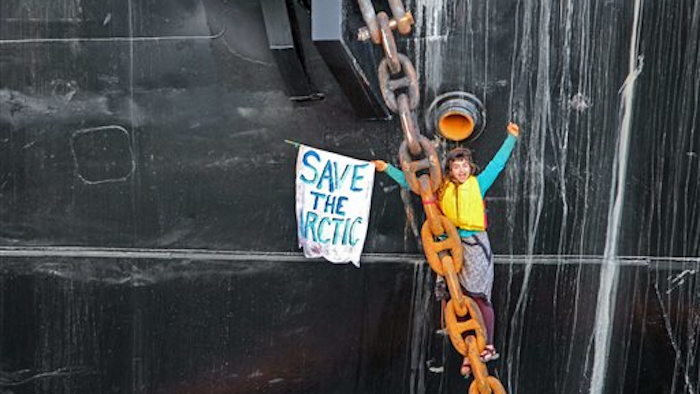 BELLINGHAM, Wash. (AP) — The woman who had been hanging off the anchor chain of a support ship that is part of Royal Dutch Shell's plans to explore for oil in the Arctic Ocean ended her dayslong protest north of Seattle on Monday morning.

Student activist Chiara D'Angelo requested assistance getting down from her perch on the Arctic Challenger in the Bellingham harbor around 9:30 a.m. Monday, the Coast Guard said.

She spent the weekend attached to the ship in an environmental protest against Shell's plans to drill for oil in the Chukchi Sea off northwestern Alaska. The oil company's proposal also has drawn large protests in Seattle, where a massive, floating drill rig is being prepared for the excursion.

Shell said Sunday that the illegal stunt would not delay its plans.

"We respect the rights of individuals to express their views related to our Arctic program, so long as they do so safely and lawfully," company spokesman Curtis Smith said.

Smith said the two activists trespassed on private property, while compromising their safety and that of others. He commended the Coast Guard and local law enforcement for de-escalating the incident.

Lt. Cmdr. Justin Noggle, chief of enforcement at Coast Guard Sector Puget Sound, said Sunday that it is the agency's duty to promote safety on the seas and in ports and to protect the First Amendment rights of people to safely and lawfully assemble on the water.

The Arctic Challenger is a converted barge that is designed to launch containment equipment in the event of a spill. Protesters have questioned its ability to be effective in the harsh Arctic climate.