Storage Bunkers Sealed Off at Nuclear Dump Closed by Leak

Hundreds of containers of waste have been entombed at the federal government's underground nuclear waste repository in southern New Mexico now that workers have closed off storage areas affected by a radiation leak, officials said Tuesday. 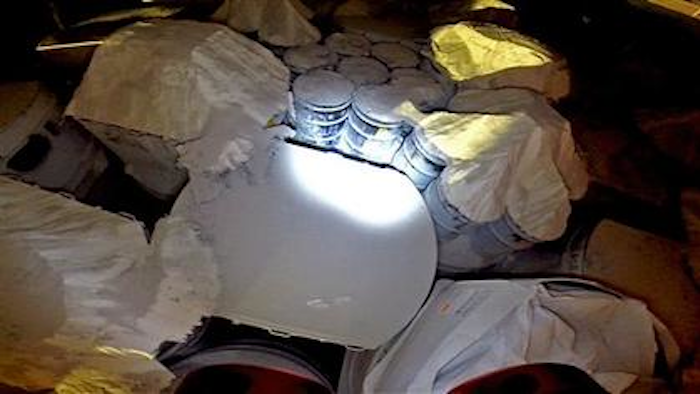 ALBUQUERQUE, N.M. (AP) — Hundreds of containers of waste have been entombed at the federal government's underground nuclear waste repository in southern New Mexico now that workers have closed off storage areas affected by a radiation leak, officials said Tuesday.

After months of work, crews finished sealing the last of two bunkers at the Waste Isolation Pilot Plant late Friday. The milestone was announced by state Environment Secretary Ryan Flynn as he updated lawmakers gathered in Santa Fe on recovery efforts at the plant, which has been closed since the February 2014 leak.

Flynn described the closure of the area known as Panel 6 and one room within Panel 7 as a major accomplishment.

Inside the two areas were 422 containers packed with radioactive waste similar to the one that ruptured last year and caused the leak. The containers appear stable, but officials say they still include an incompatible mix of nitrate salts and organic cat litter used for absorbing moisture.

"We, along with the Department of Energy, believe that they needed to permanently close these panels as soon as possible in order to prevent against any additional releases," Flynn told the lawmakers.

The state initially set a deadline for completing the work by the start of 2015, but closure of the panels was delayed in part by the investigation into the leak.

Workers used salt mined from another area of the repository, chain link, brattice cloth and steel bulkheads to close off the storage areas. They also installed air monitors.

"This is an unprecedented issue we've had to confront," Flynn said. "There were certainly some problems early on, but I think we're really starting to turn a corner now and we're beginning to see some meaningful progress at the facility itself."

The repository remains closed and federal officials have said it could take years and more than a half-billion dollars to resume full operations.

The Energy Department and the contractor that runs the repository aim to resume limited operations by this time next year, but Flynn told lawmakers he expects it will take longer.

WIPP's closure has delayed cleanup of legacy waste like contaminated gloves, tools and clothing from decades of bomb-making across the federal government's nuclear complex. In its 15 years of operation, the nuclear dump received shipments from more than 20 sites as part of the Energy Department's multibillion-dollar-a-year cleanup program.

Investigators determined the container that ruptured and forced the closure was packed inappropriately at Los Alamos National Laboratory, the birthplace of the atomic bomb.

Flynn said there's no longer any margin of error and the corrective actions called for by the state and federal investigators should prevent another mishap.

Flynn also outlined for lawmakers a $73.2 million settlement reached last month with the DOE. Nearly half of that will go toward improving transportation routes for hauling waste to the repository.