Nearly 1,200 pages of records, filed with state regulators by Plains All American Pipeline, detail a range of defenses the company established to guard against crude oil spills and, at the same time, prepare for the worst should a spill occur. 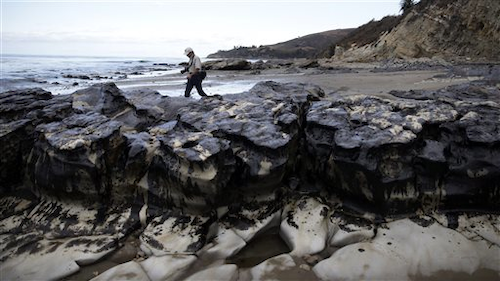 LOS ANGELES (AP) — A Texas company whose ruptured pipeline created the largest coastal oil spill in California in 25 years had assured the government that a break in the line while possible was "extremely unlikely" and state-of-the-art monitoring could quickly detect possible leaks and alert operators, documents show.

Nearly 1,200 pages of records, filed with state regulators by Plains All American Pipeline, detail a range of defenses the company established to guard against crude oil spills and, at the same time, prepare for the worst should a spill occur.

The company acknowledged the potential for oil to leak from the 24-inch, 10.6-mile-long pipeline west of Santa Barbara. A team of experts organized by the company, however, assessed that risk as remote, according to the records, known as a spill response plan, and were released under the state's public records act.

"The pipeline and its operation are state-of-the-art," asserted the analysis submitted to the state. "Spills are still possible, though extremely unlikely."

On May 19, a 6-inch breach along a badly corroded section of the line caused up to 101,000 gallons of oil to spill, blackening beaches and creating a 9-mile ocean slick. The breach and the environmental damage have challenged the company's conclusions about safe operation and rigorous monitoring.

Last year, federal regulators endorsed the plan but the company is facing questions about whether it followed its own blueprint, or if it was outdated or inadequate. The analysis assessing the potential for a spill was initially conducted in 1994 and 1995, although sections have been modified as recently as last year.

Plains All American spokeswoman Meredith Matthews said it would be inappropriate to comment because of the ongoing federal investigation.

Kristen Monsell, an attorney with the Center for Biological Diversity, said the plan's list of endangered species is at least 20 years outdated and the company fell short in following through with its requirements. "It grossly understates the potential for an oil spill," Monsell said.

"We need to find out if the company lived up to the promises of its oil spill response plan," Sen. Barbara Boxer, D-Calif., said in a statement. "I'm concerned that they may not have moved quickly enough to detect and report the spill, which could have exacerbated the environmental damage."

The cause of the break has not been determined. But preliminary information released by federal regulators suggests that corrosion was the culprit.

Plains All American took a series of steps to ward off corrosion — the pipeline was treated with a urethane coating, as well as covered with foam insulation and an outer wrap. It was also shielded by what is known as cathodic protection, a low-level electric current that is run through the pipeline to inhibit corrosion.

An analysis concluded that the potential for a leak due to corrosion was "adequately mitigated."

Yet documents released by the federal Pipeline and Hazardous Materials Safety Administration after the spill said testing conducted in early May found extensive external corrosion in some areas, although Plains said it had not received those results prior to the spill.

Additionally, federal inspectors said the area near the break had earlier been repaired because of corrosion. At the break point, over 80 percent of the wall thickness of the pipeline had been eaten away.

In 2010, the company agreed to spend over $40 million to prevent corrosion and improve leak detection on its pipelines as part of a settlement with federal officials, stemming from spills in Texas, Louisiana, Oklahoma and Kansas.

The Santa Barbara County pipeline, completed in 1990, is part of a network that moves crude oil to inland refineries. A handful of prior spills have taken place on the line, the largest about 1,200 gallons.

The plan repeatedly stresses the importance of notifying the government immediately of a leak. Under federal regulations, the company was to notify the National Response Center, a clearinghouse for reports of hazardous material releases, "at the earliest practicable moment." State law requires immediate notification of any release, or a threatened release.

Company calculations assume it should take no more than 15 minutes to discover a release and shut down the flow.

On May 19, an employee first confirmed the spill at 1:30 p.m. — two hours after the pipeline was shut down remotely. Despite its own plan calling for notifying the response center within an hour of a spill, Plains didn't contact the response center for nearly 90 minutes.

By then, the federal response led by the Coast Guard was underway, but the lag may reveal lapses in the company's planning, said Gerald Emison, a former deputy regional EPA administrator.

"It sounds like the company may not have followed its own protocol," said Emison. "The question is: Why didn't they?"

Company records describe an extensive system scrutinizing pipeline pressure and flow, which is controlled in Texas and set to trigger alarms if something goes awry.

However, it's not clear if it worked.

Pumps at an inland station were shut down at 10:45 a.m., but then restarted within 10 minutes. They were shut down again 20 minutes later. By 11:30 a.m., a Plains operator remotely shut down the entire pipeline because of what the company called pressure anomalies.

But it wasn't until 12:30 p.m. that Plains dispatched a worker to do a visual inspection. By that time, firefighters responding to a call about a petroleum smell near Refugio State Beach had discovered the spill.