Four years after an earthquake and tsunami destroyed Japan's Fukushima nuclear power plant, the road ahead remains riddled with unknowns. 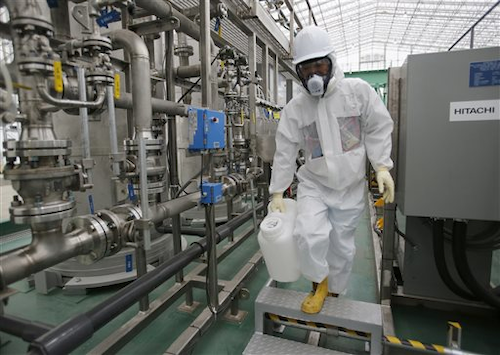 The government approved a revised 30-to-40-year roadmap Friday that delays by three years the start of a key initial step — the removal of still-radioactive fuel rods in the three reactors that had meltdowns following the March 2011 disaster in northeast Japan.

Experts have yet to pinpoint the exact location of the melted fuel inside the three reactors and study it, and still need to develop robots capable of working safely in such highly radioactive conditions. And then there's the question of what to do with the waste.

Some of the uncertainties and questions:

THE FUEL RODS: Kept cool in storage pools on the top floor of each of the three reactors, they need to be removed to free up space for robots and other equipment to go down to the containment chambers. The 1,573 bundles of fuel rods — mostly used but some new — are considered among the highest risks at the plant, because they are uncovered within the reactor building. To remove them, the building roofs must be taken off and replaced with a cover that prevents radioactive dust from flying out. Each building is damaged differently and requires its own cover design and equipment. The government and plant operator TEPCO hope to start the process in 2018, three years later than planned.

THE MELTED FUEL: Once the spent fuel rods are out of the way, workers can turn their attention to what is expected to be the hardest part of the decommissioning: Removing the melted fuel from the three wrecked reactors. The biggest questions are where the melted fuel is and in what condition. Radiation levels are too high for humans to approach. Based on computer simulations and a few remote-controlled probes, experts believe the melted fuel has breached the cores and fallen to the bottom of the containment chambers, some possibly seeping into the concrete foundation.

A plan to repair the containment chambers and fill them with water so that the melted fuel can be handled while being kept cool may be unworkable, and experts are studying alternatives. How to reach the debris — from the top or from the side — is another question. A vertical approach would require robots and equipment that can dangle as low as 30 meters (90 feet) to reach the bottom. Experts are also trying to figure out how to obtain debris samples to help develop radiation-resistant robots and other equipment that can handle the molten fuel.

CONTAMINATED WATER: The plant is still plagued with massive amounts of contaminated water — cooling water that must be added regularly, and subsequently leaks out of the reactors and mixes with groundwater that seeps into the reactor basements. The volume of water grows by 300 tons daily. TEPCO runs it through treatment machines to remove most radioactive elements, and then stores it in thousands of tanks on the compound. Water leaks pose environmental concerns and health risks to workers. Nuclear experts say controlled release of the treated water into the ocean would be the ultimate solution.

RADIOACTIVE WASTE: Japan currently has no plan for the waste that comes out of the plant. Under the roadmap, the government and TEPCO are supposed to compile a basic plan by March 2018. Waste management is an extremely difficult task that requires developing technology to compact and reduce the toxicity of the waste, while finding a waste storage site is practically impossible considering public sentiment. This raises serious doubts about whether the cleanup can be completed within 40 years.