California Oil Spill Gushed Like Hose 'Without a Nozzle'

Plains All American is facing scrutiny from federal regulators and lawmakers on Capitol Hill over the spill, which washed up goo on beaches as far as 100 miles away. 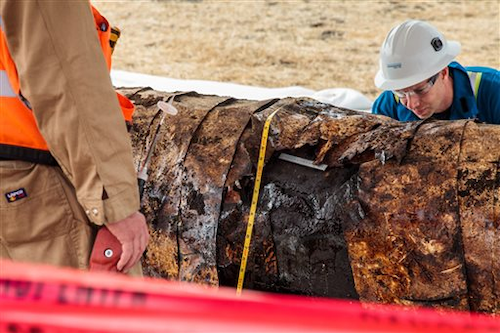 LOS ANGELES (AP) — Firefighters investigating a reported petroleum stench at a Central California beach last month didn't take long to realize a spill had taken place — oil was spreading across the sand and into the surf. Tracing the source, they found crude gushing from a bluff like a fire hose "without a nozzle," records show.

But critical time would elapse before the operator of a nearby pipeline would confirm it had ruptured and was the source of the spewing oil. An employee at the scene for Plains All American Pipeline initially suggested to firefighters that the spill "was too big to be from their pipeline," according to the documents obtained by The Associated Press.

The description of what firefighters found May 19 at Refugio State Beach was detailed in a records filed by Santa Barbara County firefighters with state officials. It indicates that shortly after firefighters arrived at the scene just before noon, they recognized that "some sort of leak or spill had occurred."

The company did not immediately respond to a request to explain why it took until later in the afternoon for its workers at the scene to confirm its line was cracked and loosing thousands of gallons of oil onto the sand and water.

Plains All American is facing scrutiny from federal regulators and lawmakers on Capitol Hill over the spill, which washed up goo on beaches as far as 100 miles away.

The failed pipeline released up to 101,000 gallons, and an estimated 21,000 gallons reached the water.

On Thursday, the House Energy and Commerce Committee opened a probe into the spill west of Santa Barbara and asked the company for detailed information on maintenance of the line, including how it addressed corrosion. The panel also wants the company to explain what it did in the hours leading up to the break near Santa Barbara, and how it reported the problem.

A key issue has been how long it took the Texas-based company to relay information to the federal government on the break. Internal planning documents stress the importance of notifying the government of a leak as quickly as possible.

Under federal regulations, the company was to notify the National Response Center, a clearinghouse for reports of hazardous-material releases, "at the earliest practicable moment." State law requires immediate notification of a release or a threatened release.

Company employees at the scene did not confirm a leak until about 1:30 p.m. But it would be nearly 3 p.m. before the company would contact the response center. By then, the federal response led by the Coast Guard was underway.

The cause of the accident is being investigated by the federal Pipeline and Hazardous Materials Safety Administration.

Earlier this month, the agency released preliminary findings that said the break occurred along a badly corroded section that had worn away to a fraction of an inch in thickness.

On Wednesday, federal elected officials released records from Plains All American that provided a look inside a company trying to contend with what became the largest coastal oil spill in California in 25 years.

Those records said that once company workers confirmed oil was in the ocean, two employees rode along the pipeline to look for a source. "It was not readily apparent from their vantage point near the beach that the oil originated" from the company pipeline, they said.

It was later determined the oil traveled to the beach down a culvert located near the break. By the time company employees confirmed the spill, it was at least an hour after firefighters reported oil on the beach.

Plains All American spokeswoman Meredith Matthews said on Wednesday that company personnel were on the beach with firefighters at about the same time the response center was alerted to the spill by local officials. "The response was not delayed," she said.

Meanwhile, a Santa Barbara County beachfront property owner became the latest in a string of people to file proposed class-action lawsuits against the company. Alexandra Geremia's lawsuit, filed Tuesday, seeks to represent more than 3,000 other coastal landowners in Southern California against Plains All American for the spill.

Popular campgrounds have been closed, commercial fishing has been prohibited nearby, and nearly 300 dead marine mammals and birds have been found after the spill.

The lawsuit mirrors others filed this month in Los Angeles federal court that mention the number of spills Plains has had in the past decade and alleges the Texas company should have had automatic shut-off valves that they assert could have prevented the spill.

The company, which has reported 229 spills since 2006, has said it regrets the incident and is addressing claims filed against it. The company said it doesn't comment on pending litigation.