When natural gas was discovered a few years ago off the shores of resource-poor Israel, it was heralded as nothing short of a miracle, but an emerging deal with developers has been plagued by criticism. 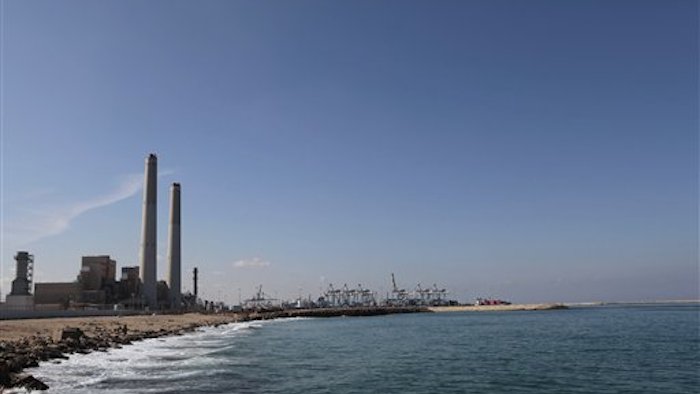 JERUSALEM (AP) — When natural gas was discovered a few years ago off the shores of resource-poor Israel, it was heralded as nothing short of a miracle, but an emerging deal with developers has been plagued by criticism, with opponents accusing Prime Minister Benjamin Netanyahu of caving to a monopoly.

After long negotiations, a government committee has struck a deal with the firms, which aims to break up their monopolistic control of Israel's gas reserves and introduce competition while maintaining incentives for fresh investment. But liberal lawmakers and environmentalists say the deal would squander a national treasure.

Netanyahu has held firm, and on Thursday welcomed the approval of the deal by the country's powerful Security Cabinet.

"This dismantles the monopoly and will bring in the coming decades hundreds of millions of shekels for education, welfare, health and for every Israeli citizen," he said.

The firms have been selling gas to the Israeli market from the Tamar field, which went online in 2013, and have agreed to sell to neighboring countries as well. The heftier Leviathan field, the largest gas field in the Mediterranean, has not yet been developed.

Israeli environmentalists and opposition lawmakers have pushed for more competition in developing Israel's offshore gas, saying it would lower prices and encourage local industry to use the environmentally friendly resource. But Israel's own antitrust commissioner has said the emerging deal wouldn't provide for real competition, and resigned in protest last month.

"Those companies do whatever they want," said Amit Bracha, director of the Israeli Union for Environmental Defense, a lobbying group. "They don't care about the social issues that we are dealing with today in Israel ... We say the natural gas is owned by the people."

While Israel's finds are minimal compared to gas giants Russia, Iran or Qatar, they are more than enough for the country's domestic needs and would enable it to reduce its reliance on costlier and dirtier oil and coal. Nearby Cyprus has also become newly resource-rich, and Israel's other neighbors may discover their own deposits.

Israel has just the world's 38th largest supply of proven natural gas reserves, according to the CIA Factbook. But Israel hopes its proximity to Middle Eastern and European markets could make it a regional player. The U.S. ambassador to Israel has called on Israel to create incentives to attract international gas developers.

The forced sales are aimed at opening the industry to competitors. The deal also sets a price ceiling for future sales to Israeli companies and commits the gas firms to complete the development of the Leviathan gas field by 2019.

"I think it's a reasonable deal," said Eytan Sheshinski, an economist who served as an adviser to Israel's energy minister in negotiations with the gas partnership, and headed a 2011 government committee that determined gas firms must pay 60% of their profits to the government.

Sheshinski said the deal would break up the "dominant monopolistic position" of the Delek-Noble partnership, while also ensuring that the Leviathan field will be developed, which he said had been in doubt due to plunging global oil and gas prices. The government was concerned that uncertainty and a drawn-out debate could scare away gas companies.

But critics say the deal might in fact strengthen the gas monopoly, because the companies will maintain a de facto monopoly over the Tamar field for the next six years before entering a similar partnership to develop the Leviathan field.

Shelly Yachimovich, a center-left lawmaker who has been a leading opponent of the deal, told Army Radio that the two smaller gas fields, to be open to new investors, will not add much competition.

"The emerging deal does not bring even one achievement to the public," Yachimovich said. "Netanyahu caved completely."

The Security Cabinet vote Thursday determined that the gas deal should be considered a matter of national security. Geopolitical concerns hang in the balance, as Israel plans to export natural gas to Egypt, Jordan and the Palestinian Authority.

But critics said there were ulterior motives at work. According to Israeli law, the Security Cabinet's ruling that the deal is crucial to Israel's national security or foreign relations means that the government can overrule any objections by antitrust authorities.

"We should not sidestep the position of the antitrust commissioner," said Tzipi Livni, a former foreign minister who is now an opposition lawmaker. "It should not be in the shadows of the Cabinet. There should be an open debate on this topic."

The gas deal will soon be presented for public objections and must be approved by the government before it is enacted.

Yossi Langotsky, a geologist who says he initiated the drilling project of the major Tamar field but no longer has financial interest in the matter, said the government capitulated to the gas companies' demands.

"It seems as if things have been turned upside down... The gas companies are acting like the landlords," he wrote in the Israeli daily Haaretz.

He said Israel made a mistake when it decided to allow the export of 40 percent of its gas two years ago.

"The consequences of that short-sighted and irresponsible decision will be the emptying of half of Israel's emergency stores to satisfy the appetite of the Israeli and foreign gas companies that are seeking quick profits, as well as treasury officials interested in the royalties," he wrote.