The last remaining strike from a widespread labor dispute at the nation’s oil refineries could be on the verge of ending. 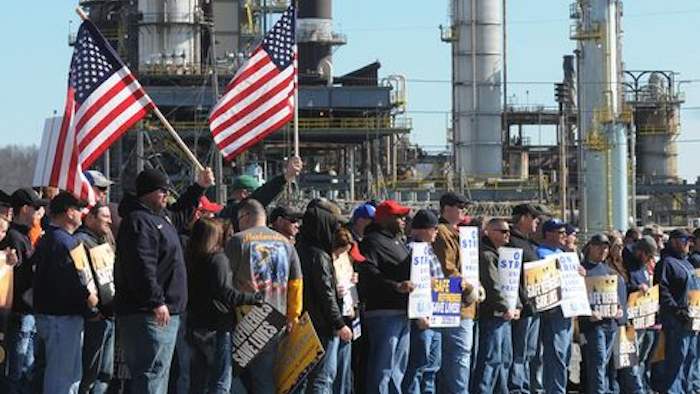 The last remaining strike from a widespread labor dispute at the nation’s oil refineries could be on the verge of ending.

Members of the United Steelworkers union at a Marathon Petroleum plant in Texas are currently voting on a tentative contract that would put more than 1,000 workers back on the job.

The Galveston Bay Refinery was one of nine refineries to go on strike in February after the contract between the USW and oil companies expired. Ultimately, 15 refineries and chemical plants were affected by the labor dispute.

In March, USW officials and lead industry negotiator Shell struck an agreement on broad contract terms, and most refinery workers returned to their jobs shortly thereafter.

The Galveston Bay plant, however, remained on strike amid disputes over local issues. Members of the local USW union rejected a proposal in late May over safety and scheduling concerns.

Three weeks later, both sides reached a tentative agreement; two days of voting on the proposal — whose terms were not disclosed — began on Monday.

"We were able to get the company to stretch their offers," Larry Burchfield, president of USW Local 13-1, told Reuters. "We got a really good return-to-work agreement."

The only other facility to remain on strike as of mid-May — a BP refinery in Ohio — returned to work later that month.