One Royal Dutch Shell offshore drill rig is headed to Alaska and a second is poised to leave, despite lacking final federal permits that would allow exploratory drilling and possible confirmation of rich oil reserves under the Chukchi Sea. 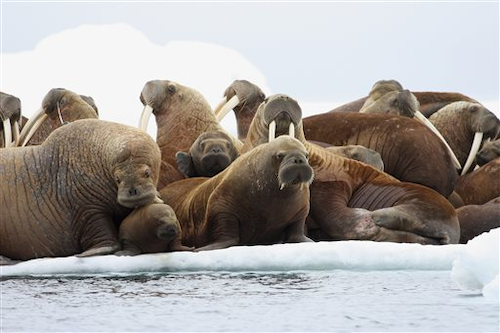 ANCHORAGE, Alaska (AP) — One Royal Dutch Shell offshore drill rig is headed to Alaska and a second is poised to leave, despite lacking final federal permits that would allow exploratory drilling and possible confirmation of rich oil reserves under the Chukchi Sea.

A spokesman for Royal Dutch Shell PLC said that's routine. But an attorney for Oceana, one of dozens of groups objecting to Arctic offshore drilling, said seeing Shell's flotilla sail north puts pressure on federal agencies to sign off on the permits.

"They're not conditions that lead to good decision-making, good governance and good protections for our ocean," Mike LeVine said. "These are the kind of situations that the public rightfully is concerned about."

The rigs were the target of protests when they docked in Seattle earlier this month. Protesters formed a blockade with kayaks and other vessels as one of the rigs left the Port of Seattle on its way to explore for oil in the Arctic Ocean.

Starting next month, Shell proposes to drill up to four exploration wells over two years in the Chukchi Sea. Exploration wells could confirm economically recoverable oil in what's suspected to be one of the last untapped prospects on the planet. The U.S. Geological Survey estimates there are more than 26 billion barrels of oil in the Alaska outer continental shelf.

Drilling is bitterly opposed by environmental groups that say Arctic offshore oil is best left in the ground. Burning Arctic oil will add to climate warming, disturb an ecosystem under stress from a severe summer sea ice loss, and put polar bears, whales, walrus and ice seals in harm's way from a blowout or spill, according to critics.

Crews are fastening materials onto the Noble Discoverer, a 572-foot drill ship, at the Port of Everett, Washington, for the voyage to Alaska.

If the company receives all its permits, it could begin drilling July 15 on the Burger prospect 70 miles off Alaska's northwest shore. Shell's in-house experts forecast sea ice will be gone a little later, the third week of July.

The company still needs permits to drill from the U.S. Bureau of Safety and Environmental Enforcement, Smith said.

"This review process depends on the complexity of the submission and responsiveness of the company in addressing BSEE comments," agency spokesman Greg Julian said in an email to The Associated Press. "We are moving promptly in our review process."

Shell also is awaiting letters of authorization allowing for any possible harassment of walrus and polar bears.

Fish and Wildlife spokesman Gavin Shire said in an email that he didn't have a firm timeline when the decisions will be made on the letters. "We are reviewing Shell's program to ensure compliance with all applicable laws," Shire said.

Staging vessels for drilling before receiving all permits is not uncommon, Smith said. It happened for Arctic drilling in 2007 and again in 2012, Smith said. "At the end of this process are the permits to drill, which are regularly or typically granted very, very late in the process," he said.

Conservation groups since the 2008 lease sale have had success delaying drilling and are trying again. In a letter Tuesday, 10 conservation groups urged Interior Secretary Sally Jewell to enforce a U.S. Fish and Wildlife Service rule requiring a minimum spacing of 15 miles between drill rigs or seismic survey vessels.

The rule protects walrus, which need resting places from which to dive for clams and other food on the sea floor, LeVine said.

Shell will be drilling near Hanna Shoal, an important walrus feeding area where floes of remnant ice collect late in the summer. Shell's two proposed well sites are near the shoal, LeVine said.

"Shell's activities create noise impacts and present other risks for walrus," he said. "The protection at issue here will help ensure that walrus have important access to feeding grounds."

"We continue to consult with the Fish and Wildlife Service on the terms of a letter of authorization," he said. "It remains our view that all of our permit applications are based on sound science."