As Massachusetts has increased its reliance on solar, wind and other sources of renewable power over the past decade, companies specializing in alternative energy have begun flexing their political muscles on Beacon Hill. 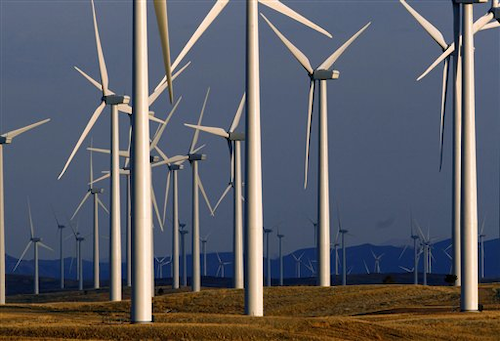 BOSTON (AP) — As Massachusetts has increased its reliance on solar, wind and other sources of renewable power over the past decade, companies specializing in alternative energy have begun flexing their political muscles on Beacon Hill.

An Associated Press review of state lobbying records found that in 2005, just two dozen power companies reported spending a total of about $1.2 million trying to woo state lawmakers. Few were primarily involved in renewable power. By 2014, the number of energy companies filing lobbying reports doubled, as had the amount spent on lobbying, nearly $2.4 million.

Of that, more than a million dollars was spent by solar, wind and hydropower energy companies, energy efficiency firms and others in the renewable energy industry.

While the lobbying totals for energy companies pale in comparison to the tens of millions spent by the state's health care industry, they do reflect the increased attention the state is paying to where Bay State residents and businesses get the power to light their homes and keep their factories and stores humming.

One of the top spenders was Veolia Energy North America Holdings Inc. — which describes itself as the largest combined heat and power provider in the state. Veolia reported spending $183,400 on lobbying in 2014. It hadn't reported any spending on lobbying before 2011.

Karole Colangelo, vice president for communications for Veolia, said the lobbying is needed to bring public officials and regulators up to speed on the changing renewable energy market. That includes combined heat and power — also known as cogeneration — which recycles waste heat from the electrical generation process into thermal energy that can be used for steam heating.

Another renewable energy company that has ramped up its lobbying in the past few years is ReEnergy Holdings LLC, which owns and operates facilities that use "forest-derived woody biomass and other wood waste residues" to produce energy.

The company spent $54,000 on lobbying in 2009, the first year it reported any lobbying in Massachusetts. By 2014, it almost doubled that, spending nearly $104,000. The bulk of that went to Travaglini Eisenberg Kiley, LLC, a government relations firm founded by former Massachusetts Senate President Robert Travaglini.

Sarah Boggess, communications director for ReEnergy, said the company has significantly expanded the number of renewable energy and recycling facilities it owns and operates in the state since 2009. The money spent on lobbying helps the company keep on legislative deliberations.

"It is important for us to keep abreast of public policy trends as we mature as a company, and as legislative action increases and our industry sector grows," Colangelo said in statement.

Traditional energy interests have also continued to spend their share to appeal to Beacon Hill lawmakers.

The American Petroleum Institute, an oil and gas lobbying group, spent the most of any energy group on lobbying in Massachusetts last year — nearly $245,000. But that's only marginally more than it spent on lobbying a decade ago — $233,000.

For an example of the increased attention on renewable energy, take the issue of solar net metering.

Ten years ago the notion of generating enough energy from solar panels on your home to sell some of that power back to the grid was still in its early stages.

Now it's the center of a Statehouse debate, with solar power companies and environmental groups pushing the state to raise the cap on the program, which they said will help dramatically increase the state's use of solar energy. They say 171 communities across the state have already reached the cap.

A spokesman for Gov. Charlie Baker said he supports solar energy, but opposes raising the cap, as do utilities in the state.

Among those urging state lawmakers to lift the cap is SolarCity — a solar installer in 18 states including Massachusetts.

The firm has also dramatically ramped up its lobbying.