California oil-and-gas regulators have refused for nearly a year to release findings of what they termed a "highest-priority" investigation of possible oilfield contamination into the water aquifers that serve millions of people in and around Los Angeles. 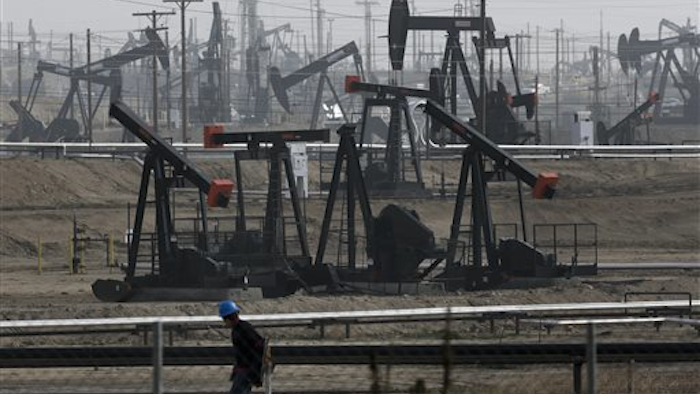 SAN FRANCISCO (AP) — California oil-and-gas regulators have refused for nearly a year to release findings of what they termed a "highest-priority" investigation of possible oilfield contamination into the water aquifers that serve millions of people in and around Los Angeles.

California is under orders from the U.S. Environmental Protection Agency to do more to protect drinking-water aquifers from contamination by the oil and gas industry. California is the country's No. 3 oil-producing state.

Home to more than 18 million people, the Los Angeles basin is also the scene of a more than century-oil oil industry that peaked in the 1930s but continues today.

A separate, state-commissioned report by the California Council on Science and Technology and Lawrence Berkeley National Laboratory this month on the safety of the process known as fracking noted that a half-million Los Angeles-area residents live, work or go to school within a mile of an oil well that is being created by the intensive method of hydraulic fracturing.

The state's main oilfield regulating office, the Department of Conservation's Division of Oil, Gas and Geothermal Resources, notified the U.S. EPA last year that it had reviewed the safety of more than 2,000 injection wells pumping oilfield wastewater and other material into water aquifers in and around the Los Angeles area.

The state completed its draft report on that investigation by August, the state told the EPA in a letter that month.

The next month, however, California oilfield regulators refused an Associated Press request for the findings on the safety review of the Los Angeles-area oilfield injection wells.

At the time, spokesman Ed Wilson wrote to the AP that the results of the state's investigation into the Los Angeles-area oilfield injection wells "is expected to inform policy deliberations upon its completion." The state would release the findings only in a joint report with the policy recommendations, Wilson said.

The analysis "will inform the public process on new regulations governing underground injection, and will be fully available to the public when it is complete," Bohlen said.

An environmental group called for immediate release of the findings.

"State oil officials need to come clean about this dirty threat to L.A.'s water supplies," Hollin Kretzmann, an attorney for the Center for Biological Diversity, said in a statement.

"It makes no sense to sit on information that's so vital to the public health," Kretzmann said. "The results should be made public immediately."