With Protest Over, Shell Prepares For Arctic Ocean Drilling

Hours after a repaired Shell icebreaker eased past protesters in Oregon to join an Arctic drilling operation, the oil giant used other vessels in its flotilla to begin excavating off the coast of Alaska in hopes of confirming the presence of billions of barrels of crude below the ocean floor. 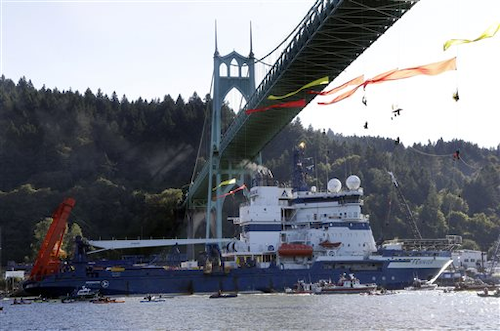 ANCHORAGE, Alaska (AP) — Hours after a repaired Shell icebreaker eased past protesters in Oregon to join an Arctic drilling operation, the oil giant used other vessels in its flotilla to begin excavating off the coast of Alaska in hopes of confirming the presence of billions of barrels of crude below the ocean floor.

Royal Dutch Shell PLC now only needs the 380-foot Fennica, repaired at a Portland shipyard, to be on hand at the drill site to ask federal regulators for permission to dig into oil-bearing rock already included on its Arctic offshore leases.

The drilling would come over the protests of environmental groups in Portland and elsewhere who say Shell has not proved it can clean up a major spill in a region covered by ice much of the year.

Critics have decried Arctic offshore drilling since before the federal government auctioned off billions of dollars in leases to Shell and other companies in 2008. But after failed lawsuits and protests, opponents have few options to stop drilling.

Protesters seized one of their last chances this week after the Fennica was gashed by an underwater obstruction in the Aleutian Islands and sent to Portland for repairs.

Thirteen members of Greenpeace USA dangled from a bridge over the Willamette River and kayakers converged on the Fennica to block the repaired icebreaker from heading toward the Pacific Ocean and on to Alaska.

The Greenpeace protesters persisted even after a federal court judge in Anchorage ordered $2,500 hourly fines. They were finally removed by authorities. Two people were arrested.

Shell officials have said offshore Alaska offers some of the most prolific, undeveloped hydrocarbon basins in the world, a potential game-changer that could increase domestic supply by more than 1 million new barrels of oil a day.

Environmental groups see only harm: a potential new source of fossil fuel that will delay a transition to renewables; industrial activity in a region already hammered by global warming and shrinking sea ice; a potential major spill that can't be cleaned up in the home of polar bears, walrus, ice seals and threatened whales.

The federal Bureau of Safety and Environmental Enforcement on July 22 granted conditional approval to Shell to begin drilling top sections of two wells in the Chukchi Sea.

Shell was not allowed to drill into oil-bearing zones because the Fennica was not on hand. Its main purpose is to carry and maneuver a capping stack, a roughly 30-foot device that when lowered into place with help from a remote, underwater-operated vehicle, can act like a spigot to stop a blowout.

The capping stack must be pre-staged and available for use within 24 hours for Shell to gain permission to drill into hydrocarbon zones.

Shell did not have an estimated time when the Fennica would reach the drill site after traveling across the Gulf of Alaska, through the Bering Sea and into the Chukchi.

Shell spokesman Curtis Smith said initial work on the first well could last until the third week of August and that the Fennica would not be required until then.

Drilling in the Chukchi has occurred before, he said.

"There have been five wells drilled in the Chukchi and Shell drilled four of them," Smith said, the last in 1991.