Billionaire environmentalist Tom Steyer called on California legislators Wednesday to require oil companies to disclose how much they make in profits from refining oil in the state. 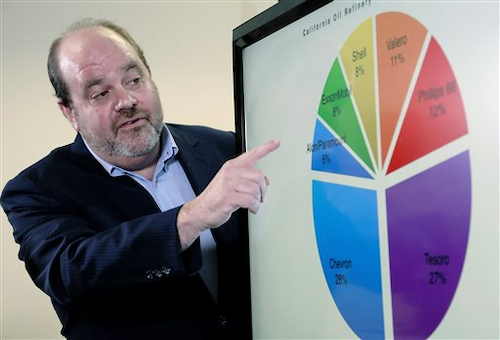 SANTA MONICA, Calif. (AP) — Billionaire environmentalist Tom Steyer called on California legislators Wednesday to require oil companies to disclose how much they make in profits from refining oil in the state.

Steyer was joined by the nonprofit Consumer Watchdog in condemning what they called historic profits for oil refiners at the expense of consumers.

During the month of July, drivers in California paid $1.2 billion more than the rest of the nation for gas, according to Consumer Watchdog's analysis. That figure is based on the amount paid per gallon in California compared to the national price average.

"I am calling on the Legislature to address this problem," Steyer said. "We have to protect Californians from these gigantic and unprecedented gas hikes."

A brief supply shortage brought a huge rise in wholesale prices in California last month. Drivers in some parts of the state paid more than $4 a gallon for gas. Prices have since decreased.

According to GasBuddy, the average price in California was about $3.70 a gallon on Wednesday. The nationwide average was about $2.63.

Steyer, a hedge fund manager who dropped $74 million into the 2014 November elections for candidates who support policies to curb climate change, said any attempt by legislators to fix California's gas market should require oil companies to fully disclose profits; give the public advance notice of planned maintenance and outages at refineries; maintain minimum gas reserves to prevent a price hike; and increase penalties for any company that illegally conspires to increase gas prices.

He pointed to Consumer Watchdog's analysis showing oil companies tripled their refiner margins, from 47 cents to $1.61 for each gallon sold between July 2014 and last month.

The analysis highlighted Chevron, which it said increased its refining profits by $214 million, or 41 percent, over the same quarter last year.

"That is money that is being made off the pockets of Californians at the pump," Steyer said.

Braden Reddall, a spokesman for Chevron, said prices are different in California because of a fire at one refinery, a strike at another, higher taxes on gas and a new state-mandated fuel regulation.

"While it is easy for groups like Consumer Watchdog and individuals like Tom Steyer to take one factor in our earnings out of context, what can't be taken out of context is the fact that many policies backed by Steyer are already increasing fuel prices for California consumers," Reddall said.

Steyer and Consumer Watchdog president Jamie Court said they have not yet identified any lawmakers who intend to carry the legislation.

The Legislature is currently in recess and would have only until the middle of September to pass legislation this year.

In addition to the money he spent on 2014 races, Steyer is a prolific Democratic fundraiser and donor who has recently hosted events for President Barack Obama and Democratic presidential candidate Hillary Clinton.

He toyed with a run for U.S. Senate next year in the race to succeed U.S. Sen. Barbara Boxer but decided against it, though he is thought to be considering a run for governor in 2018.