A string of deals involving rooftop solar companies has shown both the appeal and potential of the business — and limits to investor enthusiasm. 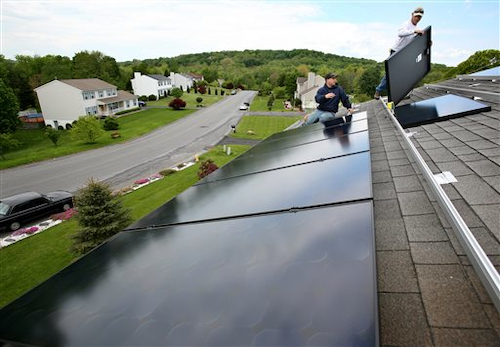 NEW YORK (AP) — A string of deals involving rooftop solar companies has shown both the appeal and potential of the business — and limits to investor enthusiasm.

Still, SunRun was able to raise the amount it had hoped to, and the price for Vivint was high, signaling to analysts that despite the recent bumps, rooftop solar remains promising.

"One (rooftop solar company) priced in the middle of its range and another sold for $2.2 billion. Things are very good in residential solar," said Shayle Kann, an analyst at GTM Research.

Not all recent moves have scared investors. SolarCity shares rose 2 percent Wednesday after it announced the acquisition of Ilioss, a developer in Mexico's fast-growing solar market. SolarCity shares are up 16 percent over the past month.

The rooftop solar business has been fueled by declining system costs, a federal subsidy that lowers the cost of solar installations by 30 percent, and low interest rates that reduce borrowing costs for systems that can cost $25,000 per roof.

This has allowed companies to offer a tempting proposition to homeowners, one pioneered by SunRun and first offered by the company in 2007: Solar panels for little or no money down and a lower electricity bill. This type of deal accounted for 72 percent of residential solar systems last year, according to GTM Research.

These deals create a stream of steady income for the solar companies that are attractive to investors because the customers have to have high credit scores, they sign up for 20 years, and the price of power steadily rises over time. Also the industry likely has plenty of growth ahead. Kann estimates that there are 16 million homes with solar-friendly roofs, occupied by owners with high credit scores that could save money with solar. Only about 700,000 systems have been sold so far.

But with interest rates expected to rise and the federal subsidy scheduled to fall to 10 percent by year end, there is concern that investor enthusiasm will wane and growth could slow in the next year or two. At the same time, competition will be fierce between SolarCity, SunEdison, SunRun and several smaller rivals.

SunRun CEO Lynn Jurich said in an interview Wednesday that her company and the rooftop industry in general have been able to cut costs so fast that they can continue to grow even when subsidies decline. In California, by far the nation's largest solar market, a generous state incentive was depleted but installations continued to rise.

Jurich attributed the drop in Sunrun's share price to a tough market for new share issues. "The fundamentals of the business are really sound and support a higher price," Jurich said. "The market will get there."

SunRun issued 17.9 million shares Wednesday at $14 a share, the midpoint of the expected range for the shares. Shares fell nearly 21 percent to $11.10 in afternoon trading Wednesday.

The solar industry will likely get a big boost if new regulations limiting carbon dioxide emissions from power plants announced by the Obama Administration this week survive legal challenges. The emissions limits may boost prices for traditional power, making solar more attractive, and states may offer additional subsides to help encourage rooftop solar in an effort to reduce demand from electric power plants.

"Rooftop clearly has a role to play in this market," said Sven Eenmaa, an analyst at Stifel Nicolaus.