A longtime manager of a railroad responsible for some fiery oil train crashes in North Dakota has been hired as an inspector for the state's new rail safety program. 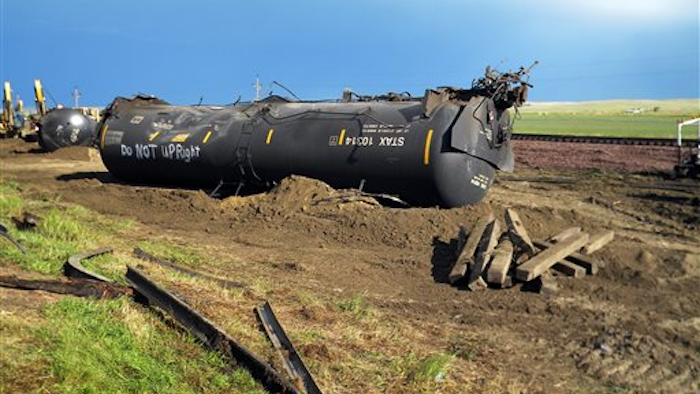 BISMARCK, N.D. (AP) — A longtime manager of a railroad responsible for some fiery oil train crashes in North Dakota has been hired as an inspector for the state's new rail safety program.

Karl Carson, a 23-year employee of BNSF Railway and a manager for the railroad since 2004, starts the $90,000-a-year state job next week conducting track and worker safety inspections.

Carson is the first of two inspectors to be hired under a state-run rail safety pilot program reluctantly approved this year by the Republican-led Legislature. While North Dakota's Public Service Commission has touted its hiring of Carson to help supplement inspections by the Federal Railroad Administration, some have questioned the panel's rationale for hiring an industry insider.

"He may have the best intentions but it does look odd," said Wayde Schafer, a spokesman for the North Dakota chapter of the Sierra Club. "It'd be like if they hired me."

Carson did not return messages left for him at the PSC.

The state rail safety program had been a campaign platform for Republican Public Service Commissioner Julie Fedorchak when she ran for the position last year. Fedorchak defended Carson's hiring, saying his experience with the railroad made him the favored choice over 17 other applicants.

Fedorchak said Carson "understands full well the responsibility of being a regulator."

Sen. Tyler Axness, a Fargo Democrat, was the first to propose the rail safety program in his failed bid against Fedorchak for a PSC seat in November. The aim was to help prevent oil train accidents like the 2013 crash in Casselton that left an ominous cloud over the city and led some residents to evacuate. That train was run by BNSF, which also had a fiery oil train derailment in May in the tiny North Dakota community of Heimdal, forcing residents to evacuate from their homes for about a day.

The rail safety program was hotly debated during the last legislative session, with Republicans saying it's not needed and that it duplicates the federal government's efforts.

Democrats blasted the move, calling it a broken promise. In the end, lawmakers funded the program that included two rail safety inspectors.

Axness has pushed for even more inspectors, though he questioned hiring those linked to railroads they will regulate.

"This isn't necessarily the first time somebody close to industry has been hired to oversee industry," he said. "I don't know if it's a pattern we should be concerned about."

Don Morrison, executive director of the Dakota Resource Council, said it is a pattern that is worrisome. Morrison points to the state's top oil regulator who is charged with promoting oil development and oversight of the industry. Lynn Helms, a chemical engineer, spent 18 years working with an oil company before being hired by the state in 1998.

"This is typical insider back scratching," said Morrison, whose group has pushed for increased rail inspections. "North Dakota has a track record of giving industry what they want and this just pours fuel on the fire."