Years of confusion, lax oversight and miscommunication among state and federal regulators are to blame for injecting protected groundwater with the waste, says a separate report California's Environmental Protection Agency. 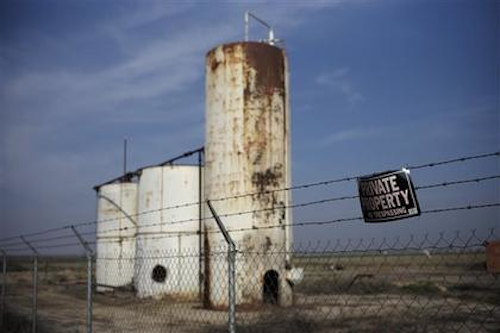 The operators of 10 oil wells in Kern County voluntarily stopped production, while two were issued cease-and-desist orders, said Steven Bohlen, head of oil, gas and geothermal resources for the California Department of Conservation.

Groundwater surrounding the wells will be tested for traces of contamination.

The action came after a review found more than 2,500 instances when the state authorized oil field injections into protected water aquifers that could be used for drinking or irrigating crops. The state identified 176 as high priority concerns.

"It doesn't necessarily mean that the aquifers have been spoiled," Bohlen said in a telephone call with reporters.

He said another 11 wells were shut down last year, and so far testing has found no evidence of contamination.

Years of confusion, lax oversight and miscommunication among state and federal regulators are to blame for injecting protected groundwater with the waste, says a separate report California's Environmental Protection Agency made public Tuesday.

It says the problem first came to light in 2011, when a state official from Sacramento temporarily working in a field office found discrepancies in records. One set said that 11 aquifers could be used for injections, while another set said they were protected.

Kassie Siegel, an attorney at Center for Biological Diversity, called on Gov. Jerry Brown to immediately halt the operation at the remaining oil wells in question.