About 60 landowners and activists rallied at the state Capitol in Lincoln as pipeline developer TransCanada Corp. defended its use of eminent domain to gain access to property owned by holdouts. 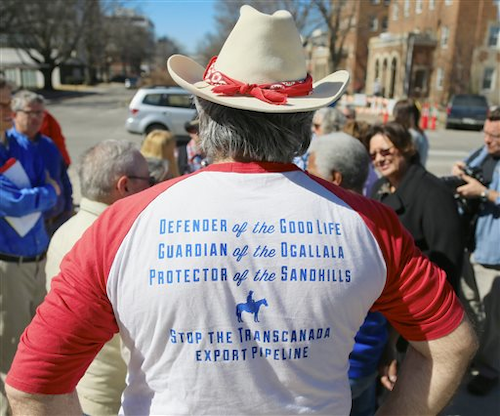 LINCOLN, Neb. (AP) — Opponents of the Keystone XL pipeline appealed to Nebraska lawmakers on Wednesday in their latest effort to overturn the state law that allowed former Gov. Dave Heineman to approve a route through the state.

About 60 landowners and activists rallied at the state Capitol in Lincoln as pipeline developer TransCanada Corp. defended its use of eminent domain to gain access to property owned by holdouts.

Their arguments in a nearly five-hour hearing included several testy exchanges with senators who support the pipeline. Opponents asked lawmakers to pass a bill that would reverse the 2012 pipeline-siting law.

The law allowed TransCanada to bypass Nebraska's Public Service Commission, which reviews most pipeline proposals, and seek approval instead through a state agency overseen by the governor. Heineman, a Republican, supported the project.

Sen. Ernie Chambers of Omaha said he introduced the bill as a "shot across the bow" to TransCanada, and to give voice to landowners who oppose the pipeline.

"Until now, the public — the people who have been affected directly by this pipeline activity — have never had a seat at the table," Chambers said. "The ones at the table were politicians who ... were in TransCanada's pocket."

The pipeline would go from Canada through Montana and South Dakota to Nebraska, where it would connect with existing pipelines to carry more than 800,000 barrels of crude oil a day to refineries along the Texas Gulf Coast.

In January, the Nebraska Supreme Court allowed the pipeline-siting law to stand by default. Four judges on the seven-member court ruled in favor of landowners who challenged the law, but a super-majority of five was needed.

The remaining three judges refused to rule on the law, arguing they couldn't because the plaintiffs in the lawsuit didn't have legal standing. Opponents responded by filing a nearly identical lawsuit with landowners who were directly affected.

TransCanada has said 90 percent of Nebraska landowners along the Keystone XL route — and 100 percent of those in Montana and South Dakota — have agreed to easements so the company can build the pipeline.

TransCanada land manager Andrew Craig said eminent domain is a tool of last resort that's needed to develop pipelines, railroads and other infrastructure. Without that power, "a single landowner or small group of landowners could block projects that deliver those public benefits to Nebraskans," Craig said.

Some opponents accused lawmakers of ignoring their pleas for help.

"We feel like we're just being left out to dry," said Randy Thompson, a rancher and longtime opponent who owned land along the first proposed route before it was moved in 2013. "You don't listen to what our concerns are."

But Sen. Bob Krist of Omaha railed against the opponents, saying he's spent hours past listening to anti-pipeline groups to try to address their concerns.

The pipeline, first proposed in 2008, still requires presidential approval because it crosses an international border.