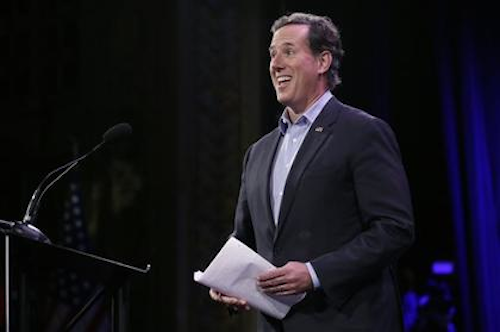 The former U.S. senator from Pennsylvania was in Raleigh to speak to conservative groups and dropped by the state Legislature for an impromptu talk. He said he'll decide by early summer whether to run for president in 2016 as he did in 2012.

Santorum criticized the Obama administration's regulations aimed at reducing power plant emissions of mercury and other hazardous air pollutants, which was part of a case heard in the U.S. Supreme Court on Wednesday. Industry groups and 21 Republican-led states have challenged the Environmental Protection Agency's decision to act against coal- and oil-fired power plants that are responsible for half the nation's output of mercury.

The EPA regulations discount the cost to society and look at the hypothetical health care benefits of eliminating a minimal amount of mercury emissions, Santorum said. Mercury accumulates in fish and is especially dangerous to pregnant or breastfeeding women, and young children, because of concern that too much could harm a developing brain.

"If you look at mercury ... there are particles all over the place. The question is, are they having any impact on public health?" Santorum said.

The president's goal is to shut down the use of fossil fuels based on a faith that's best for society, Santorum said.

"The agenda is to shut down fossil fuels," Santorum said. "The president's been very clear about that. He's against fossil fuels, for his own, in my mind, quasi-religious reasons, which is not a rationale. If someone would go forward and put forth a religious idea as to how we should regulate the environment, and it was based on a Christian or other types of religious (ideas), they would be condemned up and down."

The White House press office did not respond to messages seeking comment.

Coal burned to produce electricity has dropped by 17 percent between 2008, the year before Obama took office, and 2013, according to the Energy Information Agency. U.S. oil production has gone up by 70 percent since 2008.

The EPA rules begin to take effect next month and are supposed to be fully in place in 2016. Coal-burning power plants face $9.6 billion a year in costs to install and operate equipment that removes pollutants before they are pumped into the air, the EPA found.

But the benefits totaled between $37 billion and $90 billion annually, the agency said. The estimated savings come from preventing up to 11,000 deaths, 4,700 nonfatal heart attacks and 540,000 lost days of work, the EPA said.

The bulk of the 600 affected power plants, most of which burn coal, are in the South and upper Midwest. Santorum was responding to a question posed by House Majority Leader Mike Hager, R-Rutherford, a former engineer of Duke Energy, the country's largest electricity company.