Following a spate of explosive accidents involving North Dakota crude, the state began requiring companies on Wednesday to remove certain liquids and gases from oil before it's loaded onto rail cars — a move industry and state regulators believe will make for safer shipments. 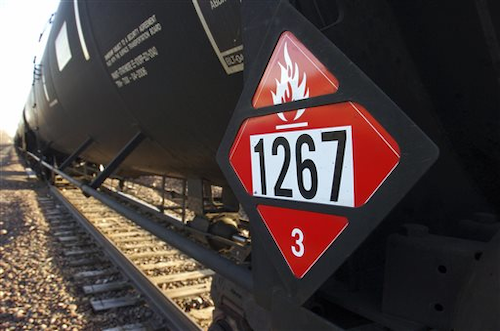 BISMARCK, N.D. (AP) — Following a spate of explosive accidents involving North Dakota crude, the state began requiring companies on Wednesday to remove certain liquids and gases from oil before it's loaded onto rail cars — a move industry and state regulators believe will make for safer shipments.

The rules, developed over the past year, require all crude from the state's oil patch to be treated by heat or by pressure to reduce its volatility before being loaded onto train cars.

"North Dakota's crude oil conditioning order is based on sound science and represents an important step in the ongoing work to ensure that oil-by-rail transportation is as safe as possible," Gov. Jack Dalrymple said in a statement.

Dozens of mile-long trains loaded with crude leave western North Dakota each week, each pulling more than 100 cars laden with about 3 million gallons of North Dakota crude. About 60 percent of the more than 1.1 million barrels of oil produced daily from the Bakken region is being moved by rail.

Oil trains carrying that crude through the U.S. and Canada have been involved in several major accidents in the past two years, including an explosion in Lac-Megantic, Quebec, that killed 47 people, and a fiery derailment in Dalrymple's hometown of Casselton that left an ominous cloud over the city and led some residents to evacuate.

The new rules require North Dakota crude to have vapor pressure below 13.7 pounds per square inch, which is less than the 14.7 psi threshold that is recognized national standards as being stable. Winter-blend gasoline that contains 10 percent ethanol is rated at 13.5 psi.

But Wayde Schafer, a North Dakota spokesman for the Sierra Club, called the new rules inadequate.

"I have a real concern that we're still going to have a problem with rail cars exploding when they derail," Schafer said.

Dalrymple, Cutting and regulators said the treated oil from North Dakota's Bakken oil fields will not be inflammable, but will be more stable.

State and industry officials also have called for more stringent federal tank car standards, improved rail operations and maintenance, and, according to Dalrymple, "a greater development of pipelines which provide the safest mode of oil transportation."

"It's important to also recognize that oil conditioning in itself is not the complete solution," the GOP governor said.

Cutting said oil drilling companies each have spent an average of about $250,000 to install equipment needed to comply with the new rules.

North Dakota crude began being shipped by rail in 2008 when the state first reached its shipping capacity with existing pipelines and infrastructure.