Attorneys for Royal Dutch Shell PLC on Tuesday sued in federal court to remove six Greenpeace activists who boarded a vessel carrying an oil-drilling rig leased by Shell across the Pacific. 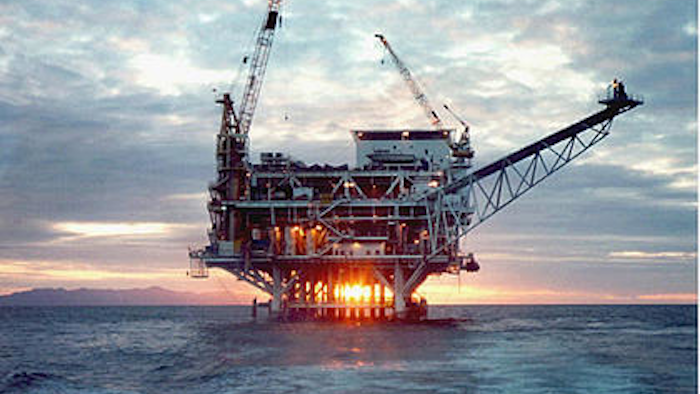 The six on Monday used inflatable boats launched from the Greenpeace ship Esperanza to climb aboard the Blue Marlin, a heavy-lift ship carrying a Transocean Ltd. semi-submersible drilling unit, the Polar Pioneer.

The drilling unit is one of two that Shell hopes to use for Arctic offshore drilling this summer in the Chukchi Sea off Alaska's northwest coast.

Conservation groups oppose Arctic offshore exploratory drilling, saying oil companies have not demonstrated they can clean up a major spill in harsh conditions far from deep-water ports, major airports and other resources that could be of use in a spill.

Shell USA spokeswoman Kelly Op De Weegh in an email said the injunction seeks an immediate end to the illegal boarding and any such actions in the future.

"These acts are far from peaceful demonstrations," she said. "Boarding a moving vessel on the high seas is extremely dangerous and jeopardizes the safety of all concerned, including both the people working aboard and the protestors themselves."

The court complaint seeks an injunction that applies to all vessels and aircraft associated with proposed Alaska offshore exploration in transit to the United States, in port, and on the way to lease areas.

The Polar Pioneer left Malaysia in early March for staging in Seattle. Shell has not obtained final approval for all of the permits needed for Alaska drilling during the open-water season, which would begin sometime after July 1.

The activists boarded the Blue Marlin about 750 miles northwest of Hawaii and announced they had supplies for several days.

Annie Leonard, Greenpeace USA executive director, said in an email that the injunction request is Shell's latest attempt to keep people from standing up for the Arctic.

"Shell wants activists off its rig. We want Shell out of the Arctic," she said.

Shell's problems in 2012, which included the grounding of a drill rig as it was towed across the Gulf of Alaska, showed Shell cannot be trusted to drill in the Arctic, she said.

"Shell knows that if the government won't stop it, then people around the world will raise their voices in protest," she said.

Greenpeace USA has the right to peacefully protest Shell's "attempts to destroy the Arctic" and to let the public know about them, Leonard said.

"We plan on watching over Shell's activity all the way up to the Chukchi Sea, where Shell's track record is already objectively reprehensible," she said.

The complaint filed in federal court in Anchorage said the Esperanza, in Greenpeace's own words, had been "stalking" and "chasing" the Blue Marlin. A boat from the Esperanza conducted surveillance, stopped in the path of the Blue Marlin to see if it would change course and positioned itself in the sun's reflection ahead of the ship.

Greenpeace developed a dedicated website to chronicle the protest, the lawsuit said.

"Greenpeace has a demonstrated pattern of conducting direct actions against Arctic oil and gas operations that violate the rights of others and create dangerous situations for their targets, law enforcement, and their own members," the lawsuit said.

Left unsanctioned, the illegal actions delay or prevent Shell from transporting people and equipment north and from conducting permitted exploration, the complaint said.

Greenpeace also targeted Shell before the company drilled in the Beaufort and Chukchi seas three years ago.

Actress Lucy Lawless and seven other activists with the organization in February 2012 boarded the Arctic-bound Noble Discoverer while it was in port in New Zealand. Greenpeace activists a month later boarded two Shell-leased ice-breakers in Helsinki, Finland.

Shell later obtained a federal court injunction in Anchorage that ordered Greenpeace USA to stay away from its drill rigs destined for the Arctic through October 2012.