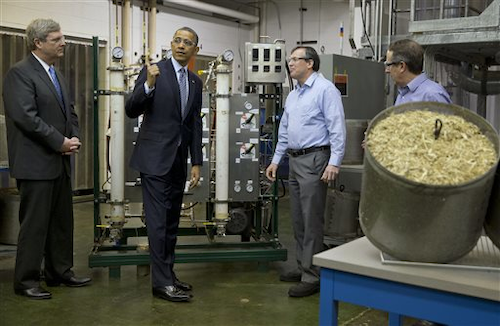 Agriculture Secretary Tom Vilsack unveiled the plans at Michigan State University, where Obama signed the sweeping farm bill into law last year. The efforts, many of which have their roots in that law, aim to reduce net greenhouse gas emissions, boost carbon capture and storage and come with various enticements, including grants, low-interest loans and technical assistance.

Vilsack said the agriculture industry accounts for about 9 percent of U.S. emissions, adding that compares favorably with the rest of the globe but can be improved.

"American farmers and ranchers are leaders when it comes to reducing carbon emissions and improving efficiency in their operations," he said in prepared remarks. "We can build on this success in a way that combats climate change and strengthens the American agriculture economy."

Before the event, Vilsack said officials "want to do this in a way that will help not only the environment but also improve agricultural productivity with improved yields, and we can also improve the bottom line of producers with greater efficiency."

Obama administration aides have said the issue of climate change became even more attractive after the November election, because the Democrat has considerable leverage to act without Congress. Such actions, though, have drawn fierce objections from Republicans and the energy industry.

Specific actions include reducing the unnecessary use of fertilizer and methane emissions from cattle and swine, reforesting areas damaged by wildfire and disease and encouraging tree planting in urban areas. For methane reduction in particular, the federal program promotes installing more anaerobic digesters, which use naturally occurring bacteria to break down organic waste to produce biogas, a fuel similar to natural gas.

Vilsack's department estimates that if all steps are followed, it would reduce emissions and enhance carbon sequestration by roughly 120 million metric tons of carbon dioxide equivalent — akin to taking 25 million cars off the road a year.

Already, Obama has moved to cut U.S. emissions through tougher fuel economy standards and has set a target of reducing overall greenhouse gas emissions by up to 28 percent below its 2005 level by 2025.

Last year's landmark agreement that commits the U.S. and China — the No. 1 and No. 2 greenhouse gas emitters — to dramatic action on carbon emissions in the coming years drew sharp criticism. Republican Sen. Jim Inhofe, a Republican from Oklahoma who's the chairman of the Senate Environment and Public Works Committee, called that agreement "hollow and not believable," and has previously vowed to block Obama's moves.

"One of the things that is striking when you get out into different parts of America and you talk to people about their business, communities and how a changing climate is affecting the way they do business, the issue is not partisan, it's practical," he said, adding that the many of the steps being taken by the USDA stem from the farm bill passed with bipartisan support.