A drone large enough to carry tanks of fertilizers and pesticides has won rare approval from federal authorities to spray crops in the United States. 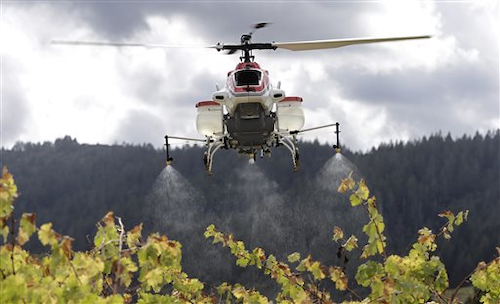 A drone large enough to carry tanks of fertilizers and pesticides has won rare approval from federal authorities to spray crops in the United States, officials said Tuesday.

The drone, called the RMAX, is a remotely piloted helicopter that weighs 207 pounds (94 kilograms), said Steve Markofski, a spokesman for Yamaha Corp. U.S.A., which developed the aircraft

Smaller drones weighing a few pounds had already been approved for limited use to take pictures that help farmers identify unhealthy crops. The RMAX is the first time a drone big enough to carry a payload has been approved, Markofski said.

The drone already has been used elsewhere, including by rice farmers in Japan. The FAA approved it for the U.S. on Friday.

"I certainly understand their cautious approach," Markofski said. "It's a daunting task given our airspace is complicated."

The drone is best suited for precision spraying on California's rolling vineyards and places that are hard to reach from the ground or with larger, piloted planes, said Ken Giles, professor of biological and agricultural engineering at the University of California, Davis. Giles tested the drone in California to see if it could be used here.

"A vehicle like this gives you a way to get in and get out and get that treatment done," Giles said.

Brian Wynne, president and CEO of the Association for Unmanned Vehicle Systems International, said in a statement that the approval highlights other potential uses.

"The FAA is taking an important step forward to helping more industries in the U.S. realize the benefits (drone) technology has to offer," he said.