Lawmakers Seek Probe of Ex-Head of Chemical Safety Board

Two House members are seeking a Justice Department investigation of the former head of the federal board that investigates chemical accidents, saying they believe he made multiple false statements while testifying before an oversight committee. 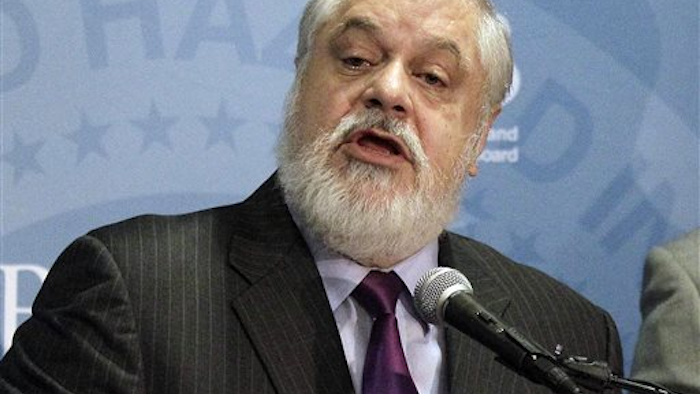 WASHINGTON (AP) — Two House members are seeking a Justice Department investigation of the former head of the federal board that investigates chemical accidents, saying they believe he made multiple false statements while testifying before an oversight committee.

The request for the federal probe was being sent to Attorney General Loretta Lynch on Wednesday by the leaders of the House Oversight and Government Reform Committee, which has been investigating what they say are wide-ranging problems at the Chemical Safety and Hazard Investigation Board.

The board is an independent federal agency whose members are appointed by the president and confirmed by the Senate. It has faced repeated scrutiny in recent years, including a critical inspector general investigation into retaliation against whistleblowers that also turned up evidence that leaders of the board were using their personal email accounts for official business.

In the letter to Lynch obtained by The Associated Press, the lawmakers identify several sworn statements by Rafael Moure-Eraso, the former chairman of the board, that they say are strongly contradicted by documents and other information they have received. He testified before the committee in June 2014 and again in March, weeks before he resigned following accusations of mismanagement.

Moure-Eraso denied having lied to the committee, saying in an interview that he believed the congressional criticism was an attempt to discredit his work at an agency that he led for roughly five years. He said there was an effort to "make the agency look bad by making me look bad" and noted that he had faced opposition from within the agency when he proposed safety-related improvements.

"I never knowingly presented to Congress, to the oversight committee, any false information," he said, later adding, "I don't think this has anything to do with bad faith on my part."

Still, the lawmakers said Moure-Erasmo's testimony to the committee should be investigated for multiple inconsistencies, including information from the inspector general's office that they say shows that Moure-Eraso continued using a personal email account for official business long after he told Congress that he had stopped the practice.

"The committee relies on the truthful testimony of witnesses who appear at our hearings to conduct effective oversight," states the letter, which was signed by the committee's Republican chairman, Jason Chaffetz of Utah, and its top Democrat, Elijah Cummings, of Maryland. "We are concerned by information and documents that suggest that Mr. Moure-Eraso's testimony was not truthful."

Lawmakers including Chaffetz had earlier pressed for his resignation, and a White House official has said the move in March came at the administration's request.