Thousands of Gallons of Oil Spilled in Mississippi River

The collision Wednesday evening near Columbus, Kentucky, damaged at least one barge carrying clarified slurry oil. The cargo tank was ruptured, causing thousands of gallons of oil to spill. 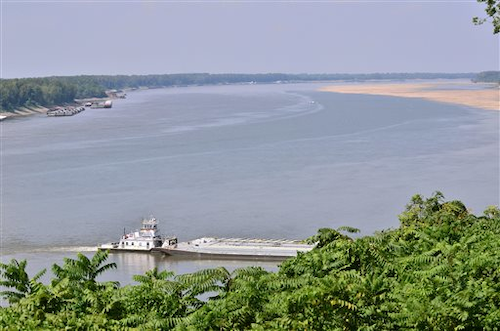 COLUMBUS, Ky. (AP) — Part of the Mississippi River was closed as crews investigated an oil spill caused by the collision of two tow boats, the U.S. Coast Guard said Thursday.

The collision Wednesday evening near Columbus, Kentucky, damaged at least one barge carrying clarified slurry oil. The cargo tank was ruptured, causing thousands of gallons of oil to spill into the river, the Coast Guard said.

The river is closed from mile markers 938 to 922, Petty Officer Lora Ratliff said.

The barge was carrying approximately 1 million gallons, but the breach was only in one area, affecting just one of its six tanks, Ratliff said. That tank holds 250,000 gallons, and Lt. Takila Powell said a little more than 120,000 gallons spilled into the river.

Both tow boat operators had been interviewed by Coast Guard investigators and underwent drug and alcohol testing, but results aren't back yet, Powell said.

It wasn't known how long the river would be closed.

"We are working diligently to try to restore our marine transportation system," Powell said. "We understand that it is vital."

The Coast Guard determined five barges were damaged in the collision, but nothing other than the oil leaked into the river, Powell said.

The tow boats were moored on opposite sides of the river and a long gash was apparent in the smaller vessel. River traffic was backed up on both sides, though it wasn't yet known how many vessels were backed up. By Thursday evening, there was no sign of a large cleanup operation.

Powell said cleanup efforts had started with the barge and that crews put a boom around the ruptured cargo tank to prevent any residual oil from leaking into the river. Cleanup crews Friday will go into the river to try to determine where the oil is, with a goal of trying to recover as much of the oil as possible from the river.

Some oil was recovered from the surface during cleanup operations Thursday, Powell said, but she didn't know how much.

Powell said the oil is thick and has to be heated to be transferred or moved.

"How this type of product typically would react is that when it reaches the water that is of a lower temperature, it would solidify and sink," she said Thursday. "But one of the things that we will be doing tomorrow is trying to determine where that oil has migrated to, to try to determine whether or not it has moved down the river or if it's still in the vicinity of where the collision occurred."

The collision happened in the middle of the river channel near Columbus, Kentucky, late Wednesday, the Coast Guard said. The cause was under investigation. The closure stretched 17 miles south to the city of Hickman.

Powell said it was hard to say how much of the oil was released mid-channel because the barge was eventually pushed up to the bank.

Keleia McCloud, assistant director of the Hickman port, says both the port and ferry service were operating normally.

Hickman County official Kenny Wilson said local communities experienced no disruptions from the spill and the water supply in Columbus was not affected because it comes from wells. He said Columbus-Belmont State Park remained open.

Powell said there had been no reports of fish kills.

Joe Hogancamp of Bardwell, Kentucky, was putting his 20-foot-long boat into the Mississippi River just downstream from the collision. He said he might refrain from fishing in the area affected by the oil spill.

"It might mess up some of the fishing," he said. "I'd say it's going to hurt the environment a little bit. I doubt we'll eat some fish (from the river) for a little while."

A May 19 oil pipeline rupture in California caused a spill of what has been estimated to be up to 143,000 gallons of crude, according to documents from Texas-based Plains All American Pipeline. That spill forced a popular state park to shut down for two months, and goo from the spill washed up on beaches as far as 100 miles away.

A July 2008 spill caused by a collision between a tugboat and a barge carrying oil on the Mississippi River in New Orleans sent 282,000 gallons into the water and caused the closure of the river.