US Retail Sales Heat up in March; Has Big Thaw Arrived?

Americans increased their spending on autos, furniture, clothing and building materials in March, lifting retail sales for the first time in four months. 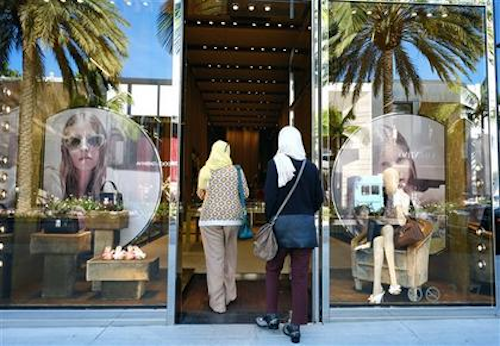 Warmer weather fueled a 2.7 percent increase in auto sales and a 2.1 percent boost in building materials, possible signs that the lagging manufacturing and construction sectors might also recover from a winter slump.

Economists say that sales should continue to climb because of the yearlong hiring surge and lower gasoline prices.

The unemployment rate has tumbled to 5.5 percent, as the economy has added jobs at a monthly pace of roughly 261,000 during the past year. That amounts to 3.1 million new paychecks to be spent at restaurants, clothiers and elsewhere.

At the same time, gas has tumbled to $2.39 a gallon, a $1.30 cheaper than a year ago, according to AAA's Daily Fuel Gauge. That should translate into consumers saving an average of $700 compared to 2014, according to government estimates.

The harsh winter curtailed some of the lift provided by lower unemployment rates and gas prices. People curtailed their visits to malls, auto dealers and open houses, which accompanied a slump in the manufacturing and construction sectors.

But the March sales figure point to stronger months ahead now that winter is in the rearview mirror.

"Together with the continued buildup of cash savings from the drop in gas prices, this suggests to us that we should expect very strong retail sales numbers over the next few months," said Ian Shepherdson, chief economist at Pantheon Macroeconomics.

Clothing purchases rose 1.2 percent and furniture buying increased 1.4 percent. Restaurant spending has edged up just 0.7 percent in March, but it has jumped 7.7 percent over the past 12 months. Spending declined at electronics stores and gas stations last month, potentially signaling that cheaper prices at the pump are not causing people to drive more miles.

Another seasonal factor may have been at play. Easter was 15 days earlier this year compared to 2014, which might have pulled spending forward.

Still, retail spending remains somewhat subdued. Many Americans have qualms about going on a shopping spree when the wounds from the housing bust and 2008 financial crisis — the most devastating economic downturn in 80 years — are still healing.

In some cases, skeptical consumers are simply awaiting proof that gas prices will stay low. Americans since January have begun to expect inflation to rise, suggesting that doubts remain about whether they will actually enjoy the projected savings, Deutsche Bank economist Joseph LaVorgna wrote recently.

Economists also say that the benefits from cheaper gas accrue slowly over time. As a result, changes in behavior are often seen only after three to six months.

The monthly retail sales report is closely watched because it provides the first indication each month of Americans' willingness to spend. Consumer spending drives 70 percent of the economy. Yet retail sales account for only about one-third of spending, with services such as haircuts and Internet connections making up the other two-thirds.

But this is because many Americans are choosing to save their money. Income growth outpaced that modest increase in spending, rising a solid 0.4 percent in February. Because more Americans were stockpiling their incomes, the savings rate increased to 5.8 percent of after-tax income, the highest level since December 2012.