A series of explosions rocked an oil filed chemical supply company north of Houston on Friday, setting off a fire that sent a broad, dense column of thick, black smoke towering into the otherwise blue skies. 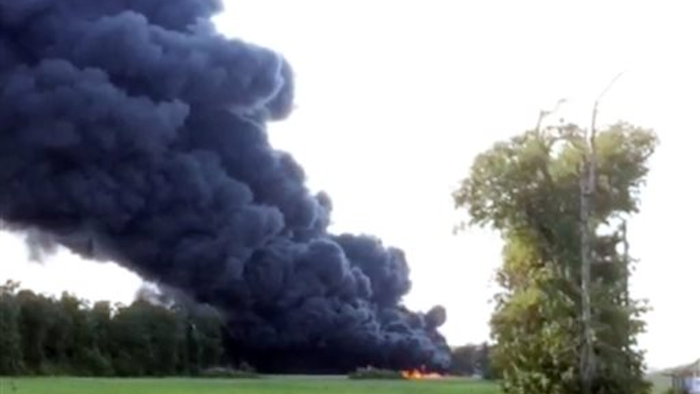 CONROE, Texas (AP) — A series of explosions rocked an oil filed chemical supply company north of Houston on Friday, setting off a fire that sent a broad, dense column of thick, black smoke towering into the otherwise blue skies.

DrillChem said no one was in the plant on the eastern fringe of Conroe, about 40 miles north of Houston, at the time of the explosions. Authorities said they knew of no one who was injured in the explosions or blaze that erupted about 4:30 p.m. Firefighters took about two hours to bring the fire under control.

"The facility was empty at the time of the fire and we are thankful that no injuries have been reported," said DrillChem CEO Brandon Hayes in a statement. "We are working closely with local authorities to determine the cause of the fire and assess the extent of the damage."

Units from several fire departments and a hazardous-materials team were at the scene. Residents up to 2 miles from the fire site were told to remain indoors. By nightfall, the alert had been reduced to a half-mile radius before being lifted completely about 7:30 p.m.

Air monitors have been set up to check for toxic air pollutants, and the U.S. Environmental Protection Agency has been notified, Conroe Fire Marshal Mike Legoudes said.

Wayne Patterson, who lives less than a mile from the facility, had just stepped from his back door with his dogs when he "saw a huge cloud of black smoke," he told The (Conroe) Courier newspaper.

"The last explosion ... we heard about three or four, but the last one shook the house," he said.

Patterson said he received a text message requesting to turn his air conditioning off. His son, who lives about a half-mile away from the explosion, drove to Patterson's house to seek shelter.

"Our eyes were burning. It's not too bad, but they are burning," he said.