First Nations and environmentalists are among those expressing alarm over Saturday's derailment of a CN Rail train that caused several tank cars carrying crude oil to catch fire and spill into a local river system. 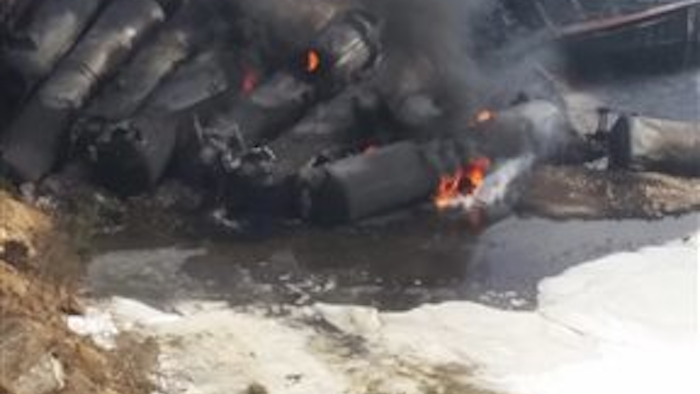 GOGAMA, Ont. - Another train derailment in northern Ontario has added new fuel to the ongoing debate over whether rail is a safe way of transporting crude oil.

First Nations and environmentalists are among those expressing alarm over Saturday's derailment of a CN Rail train that caused several tank cars carrying crude oil to catch fire and spill into a local river system.

CN said Sunday there were 94 cars on the train, all carrying Alberta crude to Eastern Canada when approximately 30 of them derailed near Gogama, Ont, about 80 km south of Timmins. Some of the cars caught fire and some crude entered the Mattagami River System.

Chief Walter Naveau of the Mattagami First Nation says his community no longer feels safe after the third CN derailment in northern Ontario in less than a month. There are concerns over the effects of smoke inhalation and environmental damage, he said.

"People in the community were feeling the affects of the toxins in the air — respiratory problems, they could feel it in their chests and their breathing," Naveau said in a phone interview.

CN said that residents would likely see smoke rising from the derailment site, but insisted it posed no threat to people or the environment.

"They may say those things but why should I trust them?" asked Naveau, adding his community is also concerned that the river flows into the community's main spawning grounds for fish, in addition to habitats for other wildlife.

CN said it was taking action to contain any spilled oil and stop it from spreading into the river system.

"They almost never are able to clean up all of the oil released in a spill like this and it's much worse even when there's a direct spill into a river because the oil gets moved down the river and the chemicals can spread."

Last month a CN freight train derailed in the same area — 29 cars loaded with crude oil and petroleum distillates ran off the tracks and caused a fire.

The Transportation Safety Board sent investigators to Saturday's spill, which is only 37 kilometres from the location of last month's derailment, but they haven't been able to reach the site yet as the fire there is still burning.

The TSB said last month the Class 111 tank cars involved in that derailment also met the upgraded standards, but still "performed similarly'' to those involved in the devastating train wreck in Lac-Megantic, Que., two years ago, which predated the changes.

The agency said last month's incident demonstrated "the inadequacy'' of the new standards and it urged Transport Canada to quickly beef up protection standards.

Glenn Thibeault, the member of the Ontario legislature who represents the area, said Saturday's accident clearly showed that the federal government must to do more to strengthen rail safety regulations.

"The cars involved in this incident are new models, compliant with the latest federal regulations, yet they still failed to prevent this incident."

Ontario Transportation Minister Steven Del Duca said in a statement that the derailment was "very concerning" and that he would be raising the matter with his federal counterpart Lisa Raitt and the railways.

"It's basically guaranteed to happen again, this is not an isolated incident, we've seen several of these kinds of derailments a month now," said Scott. "So until something dramatic is done, we're going to see this continuing over and over again."

Note to readers: This is a corrected story. A previous version wrongly attributed quotes to Glen Murray instead of Transportation Minister Steven Del Duca.