The first of more than 60 coal-to-gas plants China wants to build are part of a controversial energy revolution they hope will help it churn out desperately needed natural gas and electricity while cleaning up the toxic skies above the country's eastern cities. However, the plants will also release vast amounts of heat-trapping carbon dioxide, even as the world struggles to curb greenhouse gas emissions and stave off global warming. 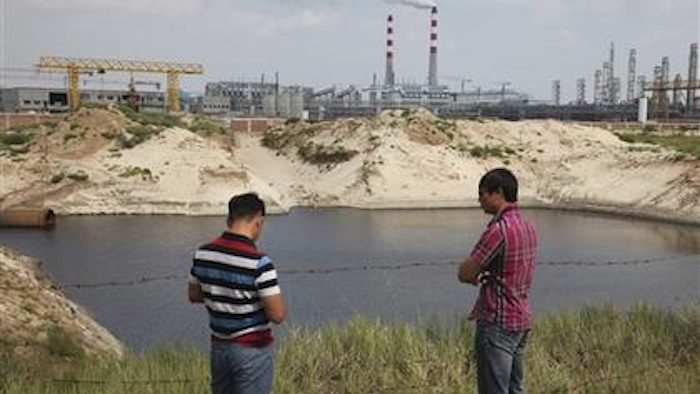 HEXIGTEN, China (AP) — Deep in the hilly grasslands of remote Inner Mongolia, twin smoke stacks rise more than 200 feet into the sky, their steam and sulfur billowing over herds of sheep and cattle. Both day and night, the rumble of this power plant echoes across the ancient steppe, and its acrid stench travels dozens of miles away.

This is the first of more than 60 coal-to-gas plants China wants to build, mostly in remote parts of the country where ethnic minorities have farmed and herded for centuries. Fired up in December, the multibillion-dollar plant bombards millions of tons of coal with water and heat to produce methane, which is piped to Beijing to generate electricity.

It's part of a controversial energy revolution China hopes will help it churn out desperately needed natural gas and electricity while cleaning up the toxic skies above the country's eastern cities. However, the plants will also release vast amounts of heat-trapping carbon dioxide, even as the world struggles to curb greenhouse gas emissions and stave off global warming.

If all of the plants start up, the carbon dioxide they'd release would equal three-quarters of all energy-related carbon emissions in the U.S., according to U.S. government data and energy experts from Duke and Stanford universities. That is far more than now produced in China by burning coal, the country's main source of power.

So far, China is running only two pilot plants to produce methane, which is also known as synthetic natural gas, in the provinces of Inner Mongolia and far western Xinjiang, with another 21 approved. Building all 60 plants would cost an estimated $65 billion.

"Once you have invested in it, China will have locked itself in a high water-consuming, high carbon-emitting path," said Chi-Jen Yang, the Duke energy researcher. "This short-term mistake will become a mistake that will be hard to turn around for decades."

Chinese leaders are under intense pressure to meet rising energy needs spurred by economic growth but are hampered by insufficient reserves of natural gas and oil. At the same time, China's massive cities are contending with air pollution so intense it can shut down schools and airports and, studies show, shorten life expectancy by as many as five years.

Central to the appeal of the coal-to-gas plan is that it moves polluting energy production far away from cities while also turning the country's vast coal reserves into more valuable natural gas.

Yet scientists at Tsinghua University and Ford Motor Co. estimate the process emits between 36 and 82 percent more greenhouse gases than burning coal to produce electricity. The resulting methane can also be used to power vehicles, heat homes and cook food.

Already, China emits more heat-trapping carbon into the atmosphere than any other nation and twice that of the U.S., the world's second biggest carbon emitter. Even without the new plants, China's carbon emissions are projected to double over the next 25 years, while U.S. emissions stay steady, U.S. Energy Information Administration data show.

"Everybody wants to find a path forward to solve the problems of (synthetic natural gas) and at the same time solve China's pollution problems," said Yanling Gong, editor-in-chief of the government-affiliated China National Chemical Information Centre.

While less directly polluting than burning coal, the Inner Mongolia plant run by state-owned company Datang has already transformed this corner of rural Hexigten county famous for its long-maned horses and sun-burnt vistas.

As a boy growing up there, farmer Adiya could ride his horse through waist-high grass for miles without meeting another person. Now, the 32-year-old says he stays indoors some mornings because of the industrial stench.

Since the plant started running in December, it has obscured the blue skies above Adiya's home with smoke while black pools of wastewater have turned up in the grasslands.

"I only wish they could build this factory in Beijing," said Adiya, who uses only one name, as is Mongolian custom.

First developed during World War II, coal gasification breaks down coal into a fuel-gas mix called syngas and then into carbon dioxide and methane. The carbon is often released into the air.

The only other gasification plant in the world outside China to commercially produce synthetic natural gas sits in the coal-rich plains of North Dakota.

However, that plant became a financial black hole as soon as it began commercial operations in 1984. Natural gas prices leveled off and oil prices fell around the time it launched, knocking askew the plant's economics.

Despite that history, China has seized on the technology as a convenient bridge between its coal surplus and natural gas needs. But warnings about coal gasification appear to be getting through to at least some in China's government.

In a rare show of transparency, the chemical industry group mounted a three-day conference in August to debate the technology's future, sparking the kind of robust public discussion almost never seen among Chinese policymakers.

From the bustling Inner Mongolian city of Chifeng, Datang senior engineer Ge Wei said the facility's toughest challenge was properly disposing of the rivers of waste water it produces.

"We just want to make this run more smoothly," Ge said. "We don't want to say who's right and who's wrong. There's a lot we can just adjust."

However, Zhou Xueshuang, the director of China's petrochemical industry regulator, said he wasn't sold yet on the coal-to-gas boom. He warned of unchecked pollution and the plants' voracious use of water in some of China's driest regions.

"From the environmental standpoint, it doesn't make sense," Zhou said at the conference. "To turn coal into gas and from gas to electricity, I think most of the projects aren't worth supporting."

During a visit to the Datang site, Associated Press reporters saw evidence of air and water pollution from the plant, two days before visitors from the conference arrived.

Although the facility's waste water evaporators, which produce much of its stench, didn't appear to be running, a sharp odor still filled the site. Adiya said the smell was usually much worse but had been diminishing in the days leading up to the official visit. By the time the tour buses showed up, the stench had disappeared. Reporters also saw a large pool of black waste water beside the plant's west wall, with no lining or other protection preventing it from contaminating groundwater.

While pollution problems are being scrutinized, few in China are talking about greenhouse gas emissions as part of the synthetic natural gas debate, said Gong from the chemical industry group.

"I think the carbon emissions issue isn't as serious as China's energy problems," she said.

Yet operating just 40 of the new facilities at 90 percent capacity would emit around 110 billion metric tons of carbon dioxide over 40 years, according to a study by Yang and Stanford University energy and environment professor Robert Jackson. The world emitted 36 billion metric tons of carbon dioxide last year from burning fossil fuels, according to the research group the Global Carbon Project.

Jackson said China could blunt some of the carbon impact by installing expensive technology at the plants that would capture carbon and bury it underground. He said none of the Chinese plants are set up to capture carbon. The North Dakota plant buries or reuses up to half of the carbon it emits.

Yang, however, said that even with the technology, the Chinese plants would capture only a third of the greenhouse gas emissions from synthetic natural gas because more carbon is released when the gas is later burned to produce electricity. What China really needs to focus on is spurring cleaner energies such as non-coal based natural gas, he said.

"If they have only built these two plants, the impact is not that big," Yang said. "If you build 30 or 40, the effect will be extremely serious. To stop that development, the time to do that is now."