India said Friday it was optimistic the world would reach an agreement to curb climate change, but said its actions would be focused on boosting its renewable power capacity five-fold rather than on cutting carbon emissions. With hundreds of millions still mired in poverty and without access to electricity, India cannot afford to reduce greenhouse gas emissions at the expense of economic growth. 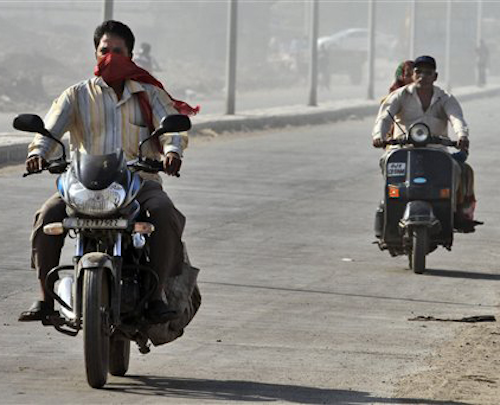 India said Friday it was optimistic the world would reach an agreement to curb climate change, but said its actions would be focused on boosting its renewable power capacity five-fold rather than on cutting carbon emissions.

With hundreds of millions still mired in poverty and without access to electricity, India cannot afford to reduce greenhouse gas emissions at the expense of economic growth, Environment Minister Prakash Javadekar said before leaving this weekend for U.N. climate talks in Lima, Peru.

"Our growth cannot be compromised," Javadekar said. "Poverty needs to be eradicated immediately. Poor people have aspirations. We must fulfill them. We must give them energy access. We cannot and nobody can question on this."

He said he was optimistic industrialized nations would agree to shoulder more of the burden to reduce greenhouse gas emissions, given that they had been polluting with fossil fuels for decades before developing nations.

"That is the just regime," he said.

The recent U.S.-China pact announcing new targets for fossil fuel use marked a positive step toward establishing this sort of equality, he said. In that pact, the U.S. said it would aim to bring down its per-capita emissions from about 20 tons while allowing China to raise its 8-9 tons per capita so that both reach a level of about 12 tons by 2030.

"They have accepted the differentiated responsibility and the need of time for growth," Javadekar said.

India had already pledged to reduce its emissions intensity—how much carbon dioxide it produces divided by its GDP—rather than promising to cut overall emissions. However, Indian officials and scientists say it could easily go beyond the target set in 2009 of cutting emissions intensity by 20-25 percent below 2005 levels by 2020.

India's preference for the per-capita emissions calculation also ignores the fact that around 400 million Indians still have no access to electricity at all, while hundreds of millions more are lucky to get a couple of hours a day. Experts worry that as India's population continues to grow beyond 1.2 billion and more people become wealthy, its share of global emissions will skyrocket.

Javadekar suggested this concern was secondary to its responsibility to pull its people up from poverty. "We are not going on the path of business as usual, which we are entitled to do, but we are not," he said.

Instead, India doubled its coal tax to 100 rupees per ton and will use the estimated $9.4 million generated for projects that would boost the country's solar power capacity to 100 gigawatts by 2020.

"It's a huge increase" from today's 20GW capacity, Javadekar said, noting the 80 GW increase would save the country from burning 50 million tons of coal a year. "It's a real game changer."

China also committed to increasing its share of renewable energy, which analysts said would send a positive signal for renewable power companies and developers to invest.