NEW YORK (AP) — Elaine Chao's record at the Labor Department suggests she'd have a light hand when it comes to safety regulation as transportation secretary and would seek to shift responsibility from the federal government to states where possible. An announcement that Chao is President-elect... 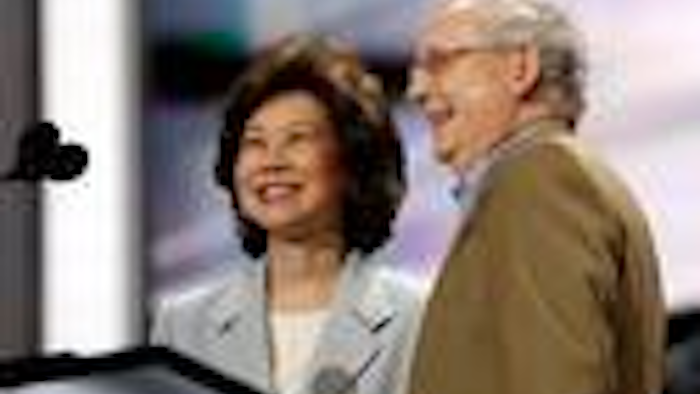 NEW YORK (AP) — Elaine Chao's record at the Labor Department suggests she'd have a light hand when it comes to safety regulation as transportation secretary and would seek to shift responsibility from the federal government to states where possible.

An announcement that Chao is President-elect Donald Trump's choice for the Cabinet post was expected later in the day, according to a Trump transition team official, who spoke Tuesday on condition of anonymity because he was not authorized to speak publicly.

Chao, 63, was labor secretary under President George W. Bush and the first Asian American woman to serve in a president's Cabinet. She also is the wife of Senate Majority Leader Mitch McConnell of Kentucky, which might be of some help if Trump is to fulfill his promise of generating $1 trillion in infrastructure spending.

Chao's record suggests she'd be skeptical of new safety regulations and may attempt to roll back existing regulations. Under Chao, the Occupational Safety and Health Administration didn't issue a single significant new safety regulation for four years, and mine safety inspectors were cut and inspections reduced, said Thomas McGarity, a University of Texas law professor and author of "Freedom to Harm," a book about the labor department that includes Chao's tenure.

Among the pressing issues facing the next transportation secretary will be how to boost the nation's aging infrastructure so that it can accommodate population growth and not become a drag on the economy, modernizing the nation's air traffic control system, ensuring that new transportation technologies are adopted in a safe manner and responding to a surge in traffic fatalities.

Whether it's integrating drones into the national airspace, deploying self-driving cars or "some other new technology, she's not going to be especially inclined to second-guess the industry when they say that this will be safe," McGarity said.

As labor secretary, her job was to protect the nation's workforce, including setting safety standards and addressing issues related to wages and retirement. She updated overtime regulations for "white-collar" workers and rules intended to force unions to disclose more details on their financial condition to members.

Chao is "a strong advocate of letting the markets function as they will, not intervening into privacy sector arrangements," McGarity said.

Mitch Bainwol, president of the Alliance of Automobile Manufactures, applauded Trump's selection of Chao as "a superb choice."

"Big issues await," he said. "The traditional regulatory approach is increasingly challenged to keep pace with the rapid rate of innovation in our sector."

More recently, Chao had been on the board of directors for Bloomberg Philanthropies, run by former New York City Mayor Michael Bloomberg. She resigned last year after learning the organization planned to expand an environmental initiative to shutter coal-fired power plants. Almost 90 percent of Kentucky's electricity comes from coal, and her ties to the organization were used against McConnell in his Senate rate.

Chao came to the United States from Taiwan with her family at age 8. Her family settled in New York, where her father, James Si-Cheng Chao, became a wealthy shipping magnate.

Chao received her undergraduate degree from Mount Holyoke College and a Master of Business Administration from Harvard. She went on to become head of the Peace Corps and deputy secretary at the Transportation Department. She was head of the United Way of America and worked at the Heritage Foundation, a Washington think tank, before becoming labor secretary.