BALATA REFUGEE CAMP, West Bank (AP) — Hatem Abu Riziq used to prowl the narrow alleyways of the West Bank's largest refugee camp battling the Israeli army. But these days he is turning his gun's barrel toward the Palestinian leadership. With the long-ruling Palestinian Fatah faction torn by... 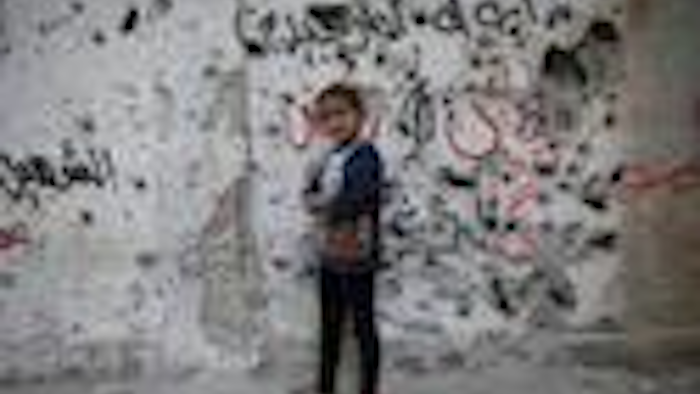 BALATA REFUGEE CAMP, West Bank (AP) — Hatem Abu Riziq used to prowl the narrow alleyways of the West Bank's largest refugee camp battling the Israeli army. But these days he is turning his gun's barrel toward the Palestinian leadership.

With the long-ruling Palestinian Fatah faction torn by rivalries, fierce shootouts between Palestinian security forces and Fatah-aligned gunmen have erupted in recent months, plunging the Balata camp into unrest and lawlessness.

The violence, much of it directed at a Fatah leadership seen as corrupt and out of touch, comes as the movement prepares to hold an overdue leadership conference at the end of the month and reflects a combustible power struggle between the faction's aging leader, President Mahmoud Abbas, and exiled rival Mohammed Dahlan, a former top aide who has the backing of some gunmen and disaffected Fatah activists.

"I no longer want to fight Israel. I'm not willing to die for these officials who are only taking care of their families and letting us suffer," said Abu Riziq, 30, who spent nearly seven years in an Israeli prison for assisting in a suicide bombing.

The violence has left about a dozen people dead this year. Observers warn it could spiral out of control the longer that Fatah remains divided.

Abbas, 82, is pushing for leadership elections in his Fatah movement and the Palestine Liberation Organization, an umbrella movement dominated by Fatah, before the end of the year, as part of what officials say is largely an elaborate attempt to cement his power and block Dahlan's return.

Abbas has no plans to step down or designate a successor, despite a recent health scare in which doctors ordered an unscheduled heart exam prompted by complaints of fatigue. Those elected to top Fatah and PLO posts could form a pool of potential successors, though none would likely challenge Abbas as long as he is in office.

The last Fatah convention was held in 2009, and one should have taken place in 2014. Abbas repeatedly delayed it, both because Dahlan still enjoyed strong support and because the Palestinian leader had no great interest in making changes. Since then, many Dahlan followers have been purged from Fatah.

Abbas' fierce opposition to Dahlan's return is both personal and political.

The two men, who had been close for years, fell out after Dahlan made thinly veiled corruption allegations against Abbas' two businessman sons, Yasser and Tarek, in 2010. A Palestinian court has since convicted Dahlan in absentia on corruption charges, and he would face arrest if he attempted to return to the West Bank without Abbas' blessing. He now lives in exile in Abu Dhabi.

Fatah leadership elections are tentatively set for Nov. 29, to be followed a month later by a vote for the PLO's main decision-making body, the Executive Committee.

While the internal elections are being held to revive the flagging appeal of Fatah and the PLO, organizations seen as stale and ossified, the upcoming convention is whipping up the tensions that have sparked waves of internecine violence around the West Bank. Clashes have spread to Jenin, another city in the northern West Bank, and to the Amari refugee camp near Ramallah.

"The fighting in the streets is a sign of the fighting within the movement, and it's a small scenario of what will happen if the succession battle takes place," said Jihad Harb, a Palestinian analyst.

The clashes have also been fueled by the tough economic situation in the West Bank, where the cash-strapped Palestinian Authority, the area's largest employer, can no longer dole out jobs to its supporters the way it used to.

Each side is believed to be pumping funds to supporters, among them armed men, in a bid to buy loyalty. Palestinian officials have accused Dahlan, who receives financial support from the United Arab Emirates, of purposely fomenting chaos to pressure Abbas.

Palestinian police say their incursions into Balata, a teeming slum of 20,000 people crammed into just one square kilometer (less than half a square mile), are an attempt to arrest 10 gunmen wanted for a number of crimes, including murder.

Gunmen like Abu Riziq have defended their turf, and the resulting clashes have struck fear in the camp's residents. On Wednesday, a gunbattle between Palestinian police and gunmen in the nearby city of Nablus killed a 39-year-old woman caught in the crossfire.

Akram Rajoub, the governor of Nablus, said the raids are meant to arrest criminals whom the gunmen are protecting. He said the gunmen are fighting the police "in an attempt to weaken the Palestinian Authority," adding that "they are being provided with expensive guns and ammunitions to fight us."

He did not provide evidence or say where the guns have come from, but residents agree outside forces are involved because of the steep price of the weapons.

The Palestinian Authority has struggled to disarm militants since the end of the second Palestinian uprising in 2005, and some parts of the West Bank are still flush with weapons.

Israel has been cracking down on weapons in Palestinian hands, shuttering gun-producing factories and seizing caches, but illicit trade continues nonetheless. Military-grade M16s, bought from the Israeli underworld or produced in makeshift Palestinian factories, are the weapon of choice, but gunmen also use handguns and more crude arms based on the Swedish "Carl Gustav" submachine gun.

The gunmen deny Dahlan is providing the money for their weapons. They described gun buying and selling as a legitimate occupation for men who "are jobless and need to make a living." But with the Israeli crackdown driving up prices, it remains unclear how these men can afford M16s that cost upward of $15,000 apiece.

Dozens of M16 guns were displayed in a recent parade in the camp to mark the death of Fatah's founder, the late Palestinian leader Yasser Arafat. Abu Riziq delivered a speech during the event, surrounded by men armed with M16s, as he criticized the Palestinian Authority for the raids into the camp.

Abu Riziq and other gunmen are digging in their heels, vowing not to lay down their arms so long as Abbas remains in power.

"We will never vote for Abbas again," said Abu Riziq. "If he remains, we will remain suffering."