ROME (AP) — The Lanzi company has been curing hams in the Italian town of Norcia for over half a century. It's a family business, employing owner David Lanzi's five children as well as 60 locals. All of that is now at risk, after Sunday's earthquake knocked down the walls of the company's cured... 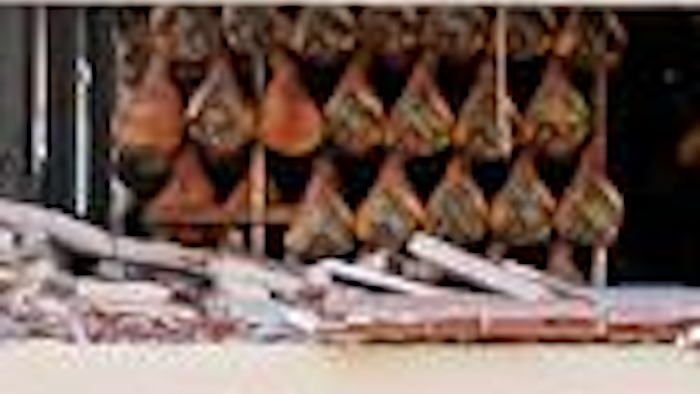 ROME (AP) — The Lanzi company has been curing hams in the Italian town of Norcia for over half a century. It's a family business, employing owner David Lanzi's five children as well as 60 locals.

All of that is now at risk, after Sunday's earthquake knocked down the walls of the company's cured meats production site. Lanzi, 78, is working day and night to secure the produce, clean up rubble and seek state aid. Most of the employees are homeless and sleep in cars or tents. Without aid, the business will go under.

"I won't fire anyone" he told The Associated Press. "If the state helps us, fine. Otherwise we're done."

Norcia, one of the towns most heavily hit by the 6.6-magnitude quake, is known for its cured hams. Lanzi has 15 million euros ($16.8 million) in annual revenue and is facing 1.5 million euros in estimated damages from the quake, which was the third major shock since August.

Commerce officials say the quake affected an area of central Italy with some 10,000 businesses, hitting hardest the artisans who account for 90 percent of the economic turnover.

Dairy businesses and the makers of prized hams have seen their warehouses damaged and are struggling to distribute stock before it spoils. The tourism sector is all but dead for the foreseeable future. And small artisans are facing supply and delivery interruptions.

Prime Minister Matteo Renzi has pledged to rebuild homes, churches and businesses, which will be key to re-establishing the economic motor for the quake zone. The government last week earmarked 40 million euros to 62 communities affected by two jolts on Oct. 26, and will meet this week to commit new funds after Sunday's more powerful quake, which extended the damaged area to nearly 200 communities.

The head of the association of artisanal businesses in one of the Marche region's provinces, Alessandro Migliore, said logistics are the biggest obstacles facing businesses. Manufacturing bases in particular were outside the city centers that suffered the worst collapses, but damage to roads means many companies either can't get supplies or can't ship their wares. The pinch is felt especially by the shoe industry, which already was suffering under Chinese competition, he said.

With many people displaced to coastal areas, Migliore said there are increasing discussions about moving production to safer ground and away from the mountains traversed by fault lines. The scope of the impact remains to be tallied.

"It is very difficult to discuss the number of business affected, because right now the priority is figuring out where to sleep at night," Migliore said.

Disrupted transportation is especially keenly felt by the many small agricultural producers, especially those with livestock.

"Very often these producers sell their meat and cheese directly to tourists, and they suffered damaged barns with the roofs caved in and damage also to their own homes. While other citizens of these areas can move to the coast, these producers need to stay close to their businesses," said Francesco Fucili, the president of Coldiretti in Macerata province.

The Coldiretti farm lobby says dairy farmers no longer have places to deliver their milk as many cheese producers have stopped work because of damage to their production sites.

Damaged barns have left some 60,000 cows, sheep and swine without safe shelter heading into winter. As a result, some of the livestock either must be sold to other farmers to fatten up, or find places for quick slaughter.

"It is not easy to resolve these issues, Fucili said.