WASHINGTON (AP) — The Latest on the 2016 presidential campaign (all times EDT): 7:15 p.m. Four senior Democratic senators are calling on the Justice Department and the FBI to promptly release more information on emails identified by FBI Director James Comey as pertinent to its investigation of... 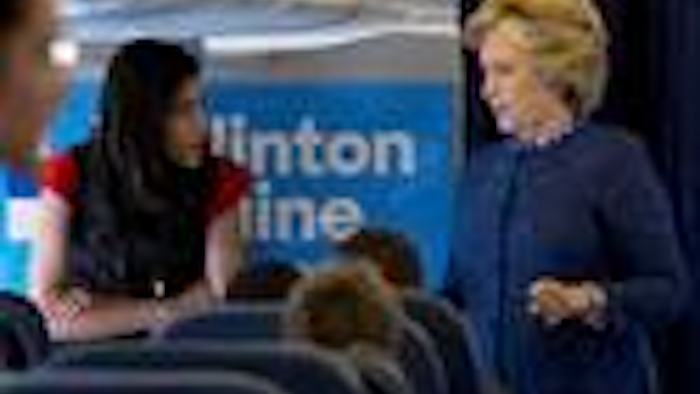 WASHINGTON (AP) — The Latest on the 2016 presidential campaign (all times EDT):

Four senior Democratic senators are calling on the Justice Department and the FBI to promptly release more information on emails identified by FBI Director James Comey as pertinent to its investigation of Hillary Clinton's personal email server.

In a letter Saturday, the senators say such a letter with few details released in the days before the Nov. 8 election is being used for political purposes and has led to a misleading impression about the FBI's actions and intentions.

The senators are asking that the Justice Department and FBI provide more detailed information by Monday about what investigative steps are being taken, the number of emails involved and what is being done to determine how many of the emails are duplicative of those already reviewed by the FBI.

The letter was sent to Comey and Attorney General Loretta Lynch by Sens. Benjamin Cardin of Maryland, Thomas Carper of Delaware, Patrick Leahy of Vermont and Dianne Feinstein of California.

Donald Trump is stirring passions far from the United States.

In the Brazilian city Sao Paulo on Saturday, a right-leaning group called Together for Brazil held a demonstration of support for Trump, with English-language signs saying "Brazilians for Trump" and "Hillary for Prison."

Scuffles erupted when those demonstrators were confronted by members of two small leftist groups, the Anti-Fascist League and Revolutionary Periphery. Police say they detained four people. No serious injuries were reported.

The confrontation involved some 100 people along the Avenida Paulista, one of the city's main business thoroughfares.

Clinton is repeating her calls for Comey to put out the "full and complete facts" about the new review of the emails.

She says: "Put it all out on the table."

Clinton is speaking to campaign volunteers at a community center in Daytona Beach, Florida.

Just the mention of the Comey letter and the renewed attention to her private email server was met with boos from the crowd.

A Democratic New York congressman appears to be accusing FBI Director James Comey of trying to sway the presidential election.

Rep. Gregory Meeks says it's "unbelievable" Comey, this close to the election, would disclose that the FBI is looking into a new set of emails that appear to be pertinent to the Hillary Clinton email investigation.

Meeks and other members of the Congressional Black Caucus are supporting Clinton's calls for Comey to release more details of the review.

Meeks says Comey should not "be the one the one that's trying to sway an election 10 days beforehand."

Hillary Clinton is squeezing some tail-gating into her day trip to Florida.

Clinton stopped at the party before the homecoming game at Bethune-Cookman University. That's a historically black college in Daytona Beach.

The Democrat was met with cheers and quickly swarmed by fans as she and her security tried to work the crowd.

The scene became so crowded a deejay cautioned the crowd "Let her breathe!"

As she urged people to vote, Clinton promised to "build on the progress of President Obama."

This stop was part of a push to drive high turnout among black voters, who are overwhelmingly backing Clinton over Republican Donald Trump.

Donald Trump is stoking doubts about the integrity of Colorado's vote-by-mail system. He's suggesting that votes are selectively counted depending on the preferences of who's counting. But he offered no evidence that has ever happened.

Speaking at a rally in Golden, Colorado, Trump says that he has "real problems with ballots being sent" by mail. He describes a purely fictional scene in which counters sort through ballots, saying: "Here's another ballot, throw it away. Oh here's one I like, we'll keep that one."

He says his campaign has "a lot of people watching you people that collect the ballots." And he's advising supporters to track their ballots to ensure they've been counted.

Trump has repeatedly raised fears about the integrity of the U.S. voting system. Yet experts say voter fraud is rare.

Given a political gift from the FBI, Donald Trump's challenge now becomes avoiding any big missteps that might overshadow Hillary Clinton's troubles over the campaign's final days.

If history is a guide, that won't be easy.

At Trump's Golden, Colorado, rally on Saturday, his supporters were worried about whether he can stick to his message about emails, now that the FBI is reviewing a newly discovered trove described as pertinent to its Clinton investigation.

Fifty-year-old Stacie Null of Castle Rock says Trump utters "some off the wall stuff" but "he is who he is."

Fifty-six-year-old Howard Sanger of Parker, Colorado, fears the prospect of yet another Trump gaffe but hopes "his inner circle will stop him."

Donald Trump is going after longtime Hillary Clinton aide Huma Abedin following the discovery of new emails that FBI Director James Comey told Congress are pertinent to the investigation into Clinton's use of a private email server as secretary of state.

Trump asks a Golden, Colorado, rally crowd, "Is she going to keep Huma?" He says, "Huma's been a problem."

The emails in question were on a device belonging to Weiner, who is separated from Abedin. He is being investigated for his alleged sexting with a minor.

Trump has long warned that Weiner posed a potential national security risk because of his access to information through his estranged wife.

Trump told a crowd in Golden, Colorado, on Saturday that the FBI's review of Clinton email practices raises "everybody's deepest hope that justice, as last, can be properly delivered."

He's taken to calling the matter the biggest political scandal since Watergate.

Scrutiny of Clinton's email practices came back to the fore when FBI Director James Comey told Congress on Friday that newly discovered emails are pertinent to the case.

The emails in question were on a device belonging to Anthony Weiner, the disgraced former New York congressman who is separated from longtime Clinton aide Huma Abedin. Comey gave few details, and no indication that the new trove would change the FBI's decision in the summer not to prosecute Clinton for what he called her "extremely careless" handling of sensitive emails as secretary of state.

Hillary Clinton's campaign is lashing out at the FBI. The campaign says there's no indication that a cache of recently discovered emails being reviewed by the agency is even about her.

Clinton campaign chairman John Podesta says FBI Director James Comey's information is "long on innuendo" and "short on facts." He says there's "no evidence of wrongdoing. No charge of wrongdoing. No indication this is even about Hillary."

On that latter point, though, Comey in fact says the newly discovered emails do appear "pertinent" to the Clinton email investigation.

Podesta and campaign manager Robby Mook are calling on the FBI to release more details involving the inquiry of emails on a device belonging to Anthony Weiner, the disgraced former New York congressman who is separated from longtime Clinton aide Huma Abedin.

A government official tells The Associated Press that the Justice Department had advised the FBI against telling Congress about new developments in the Hillary Clinton email investigation because of the potential fallout so close to the election.

The FBI says it recently came upon new emails possibly pertinent to that investigation. Director James Comey said in a letter to Congress that the FBI discovered the emails while pursuing an unrelated case and would review whether they were classified.

The government official says the Justice Department concluded the letter would be inconsistent with department policy that directs against investigative actions that could be seen as affecting an election or helping a particular candidate.

The official says Comey made the decision to go ahead with the letter independently of the Justice Department.

The official wasn't authorized to discuss the department's internal deliberations publicly and spoke on condition of anonymity.