Freed hostages brought to Kenya, after being held in Somalia

NAIROBI, Kenya (AP) — Twenty-six Asian sailors freed after being held hostage by Somali pirates for more than four years arrived in Nairobi on Sunday. The sailors were released after a ransom was paid, and international mediators said it "represents the end of captivity for the last remaining... 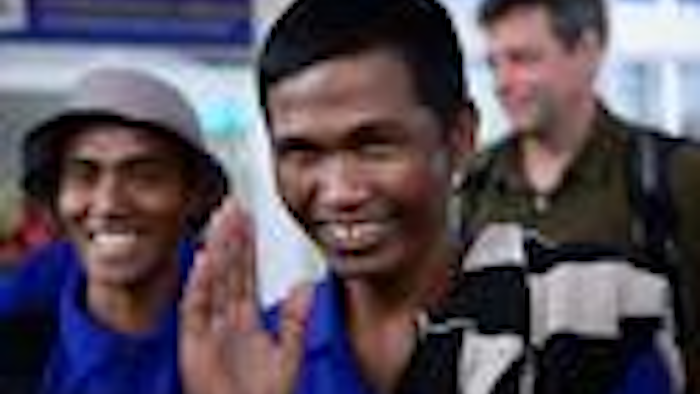 The sailors were released after a ransom was paid, and international mediators said it "represents the end of captivity for the last remaining seafarers taken hostage during the height of Somali piracy."

The crew from Vietnam, Taiwan, Cambodia, Indonesia, China and the Philippines had been among the few hostages still in the hands of Somali pirates.

The sailors were the crew of the FV Naham 3, a Taiwan-owned fishing vessel seized in March 2012, said pirate, Bile Hussein. The ship later sank.

Hussein said $1.5 million in ransom was paid for the sailors' release. That claim could not be independently verified.

The 26 sailors will be re-patriated to their home countries, said John Steed, the coordinator of the Hostage Support Partners for the U.S.-based organization Oceans Beyond Piracy, said in a statement.

Steed said only one other group of hostages had been held longer than this one, which spent 1,672 days in captivity.

"They are reported to be in reasonable condition, considering their ordeal. ... They have spent over four and a half years in deplorable conditions away from their families," Steed said.

He said another member of the crew died in the hijacking and two died of illnesses in captivity.

Piracy off Somalia's coast was once a serious threat to the global shipping industry, but attacks have dropped dramatically in recent years after ships began carrying armed guards and European Union naval forces increased patrols.

No commercial vessel has been successfully attacked since 2012, but the threat of piracy remains, Steed said.

The majority of hostages held by Somali pirates have been sailors on merchant ships, though European families also have been kidnapped from their yachts while traveling in the dangerous Indian Ocean coastal waters.