A look at where Republican U.S. Sen. Pat Toomey and Democratic candidate Katie McGinty stand on a selection of issues, from abortion to trade. The election is Nov. 8. ABORTION McGinty supports abortion rights and opposes proposals to halt federal payments to Planned Parenthood. Toomey opposes... 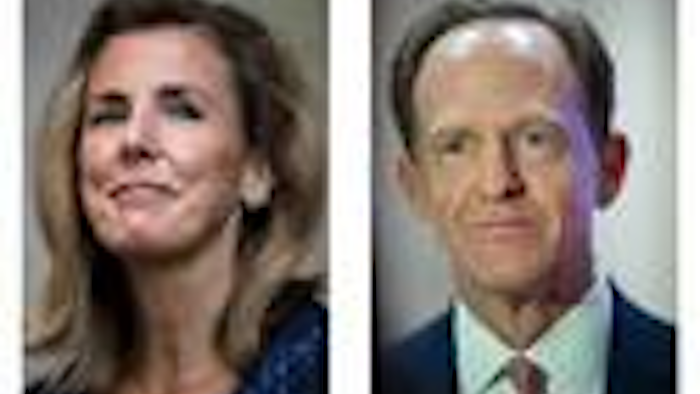 A look at where Republican U.S. Sen. Pat Toomey and Democratic candidate Katie McGinty stand on a selection of issues, from abortion to trade. The election is Nov. 8.

Toomey opposes abortion rights, with exceptions for rape, incest and saving the life of the mother. He is a co-sponsor on Senate legislation banning most late-term abortions and voted most recently in December to halt federal payments to Planned Parenthood.

McGinty supports an amendment to the Constitution to allow Congress and states to limit the money raised and spent in election campaigns — limits the Supreme Court has expanded in recent years.

Toomey voted in 2014 against a Democratic plan to amend the Constitution to allow Congress and states to limit the money raised and spent in election campaigns by outside groups, candidates and others.

McGinty says she opposes a tax increase on the middle class. She supports ending unspecified corporate tax breaks and increasing taxes on individuals making a $1 million or more. McGinty did not point to a specific deficit reduction plan she supports.

Toomey voted to allow tax rates to rise on individuals making $400,000 or more and couples earning $450,000 or more. In a 2012 budget proposal, Toomey proposed reducing spending to about 18 percent of GDP (it was about 20 percent in 2015), reducing all income tax rates, including lowering the top individual rate to 28 percent and the top corporate tax rate to 25 percent, while limiting unspecified tax breaks. The proposal also would have capped Medicaid spending and converted Medicare into a voucher-like program.

Both candidates say they believe climate change is happening and that scientific literature points to a human role in it.

McGinty supports the Obama administration's new carbon pollution regulations on power plants, called the "Clean Power Plan," currently held up in federal court, and the administration's agreement to a United Nations accord on global warming in which countries pledge to limit the amount of greenhouse gases emitted by human activity in the coming decades. McGinty supports federal regulation of hydraulic fracturing.

Toomey opposes the "Clean Power Plan" and the United Nations accord. Toomey voted in 2012 to stop EPA regulations to reduce mercury and other toxic emissions from oil- and coal-fired power plants. Toomey opposes federal regulation of hydraulic fracturing.

McGinty supports legislation to establish a national insurance fund to provide part-time and full-time private-sector employees with up to 12 weeks of paid leave with 66 percent wage replacement for a personal or family member's medical emergency.

Toomey voted for legislation to give private-sector employees the ability to accrue up to 160 hours of paid leave each year in return for overtime hours worked.

McGinty supports requiring background checks for online gun sales and purchases at gun shows; a ban on the sale of armor-piercing "cop killer" bullets; a ban on the manufacture and sale of "military-style" firearms; a ban on allowing people on the terrorist watch list to obtain a firearm; imposing a federal limit on magazine capacity; and repealing a federal law that shields gun manufacturers from liability in cases where their weapons are used in crimes.

McGinty opposes federal reciprocity legislation to require every state to recognize and allow the use of concealed carry licenses or permits issued by other states.

Toomey voted to require background checks for online gun sales and purchases at gun shows. Toomey voted against measures sponsored by Democrats to prevent a suspected terrorist from buying a firearm and in favor of bills sponsored by Republicans. GOP leaders did not allow a vote on two other proposed compromise bills that Toomey supported.

Toomey voted to repeal the Affordable Care Act. He says he supports eliminating tax provisions that make it more expensive for individuals to buy insurance, requiring health plans to be portable and renewable and limiting the ability of people to sue medical professionals or institutions for damages from malpractice.

McGinty supports a bipartisan immigration reform bill that passed the Senate in 2013 that would establish a path toward citizenship for an estimated 11 million immigrants living illegally in the United States and double aid for border security to stem the flow of immigrants who across the border without legal permission. McGinty opposes Senate legislation barring federal funds from sanctuary cities, which are jurisdictions that resist turning over immigrants living in the country illegally to federal authorities.

Toomey opposes "amnesty" for immigrants in the country illegally and voted against the bipartisan immigration reform bill. Toomey supports a guest worker program and increasing spending on border security. Toomey says Donald Trump's proposal to build a wall along the U.S.-Mexico border is simplistic and says Trump's plan to deport every immigrant living illegally in the United States is not realistic. Toomey sponsored legislation barring federal funds from sanctuary cities.

McGinty opposes the widespread use of ground troops in Syria and supports the Obama administration's nuclear accord with Iran.

Toomey opposes the widespread use of ground troops in Syria and opposes the nuclear accord with Iran.

McGinty supports an increase in the federal minimum wage, currently set at $7.25 an hour, to $15 an hour.

Toomey has voted against various Democratic proposals to raise the minimum wage, most recently in 2015.

Toomey has not endorsed anyone for president, but has not said who he will vote for or whether he will eventually endorse someone. He said he would never vote for Clinton.

McGinty supports Clinton's plan to allow borrowers to refinance loans at current rates, make tuition at in-state four-year public colleges and universities free for families with income up to $125,000 by 2021 and make tuition free at all community colleges.

Toomey voted for legislation, signed by President Barack Obama in 2013, to link interest rates on federal student loans to 10-year Treasury notes, with a cap on how interest rates could climb and locking in interest rates for the life of each year's loan.

McGinty was noncommittal on whether she would support Obama's nominee, Merrick Garland, but she says he deserves Senate consideration.

Toomey did not support a vote on Garland's nomination, saying Senate consideration of a nominee should wait until after the election. Toomey says he would be supportive of a Trump nominee to the Supreme Court.

Toomey voted for free trade deals with Panama, South Korea and Colombia, but opposes the Trans Pacific Partnership. He voted against the extension of the Export-Import Bank.