LOUISVILLE, Ky. (AP) — An overheating, smoking Samsung smartphone forced the evacuation of a Southwest Airlines jet that was preparing to take off Wednesday from the Louisville airport. The incident raised fresh trouble for Samsung, which saw its new Galaxy Note 7 device recalled last month... 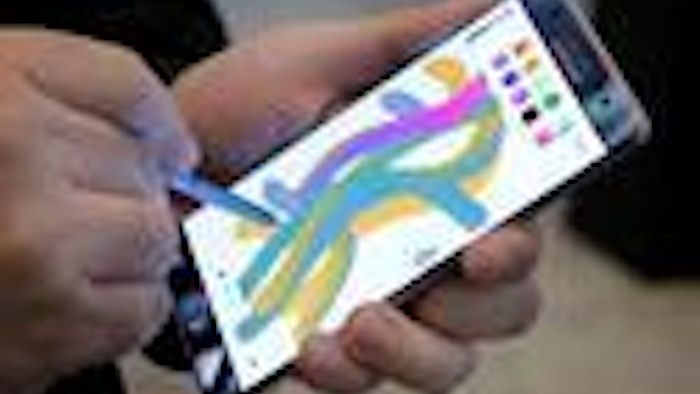 LOUISVILLE, Ky. (AP) — An overheating, smoking Samsung smartphone forced the evacuation of a Southwest Airlines jet that was preparing to take off Wednesday from the Louisville airport.

Samsung, Southwest and federal aviation-safety officials declined to say what model of Samsung phone was involved, saying they were still investigating.

But an Indiana woman, Sarah Green, told The Courier-Journal of Louisville that it was her husband's Galaxy Note 7 that made popping noises and started to smoke after he powered it down while the plane sat at the gate.

Green told the newspaper that her husband, Brian, received the Galaxy Note 7 about two weeks ago as a replacement for his recalled phone. He called her from someone else's phone to tell her what happened.

Last month Samsung agreed to recall the Galaxy Note 7 after receiving 92 reports of batteries overheating in the U.S., including 26 reports of burns and 55 cases of property damage. The Federal Aviation Administration took the unusual step of warning passengers not to use or charge the devices while on board and not to stow them in checked luggage.

Flight attendants on many airlines added a warning about the Samsung device to their pre-flight safety demonstrations.

However, the FAA's advisory to airlines did not apply to replacement Galaxy Note 7s. Those phones have a green battery icon.

Samsung Electronics Co. said in a statement that it could not confirm that the latest incident involved a new Note 7. Samsung said it is working with authorities to recover the device and confirm the cause of overheating.

The FAA also declined to specify the model of the phone. Spokesman Ian Gregor said the FAA was still investigating the incident.

The Galaxy Note 7, which sells for $850 to $890, competes in the high-end smartphone business with Apple and its new iPhone 7. Samsung dominates the market for Android-powered phones but faces growing pressure — just Tuesday, Google unveiled its new Pixel phones at $650 and up.

Wednesday's mishap occurred while the Southwest plane with 75 passengers and crew members prepared to fly from Louisville to Baltimore. Fire Capt. Sal Melendez said the device overheated during the crew's safety demonstration.

Southwest Airlines Co. spokesman Brad Hawkins said a passenger reported smoke coming from a Samsung device and that everyone got off the plane through the main cabin door.

No one was injured in the evacuation, but the plane's carpet suffered minor damage where the phone was dropped, fire officials said.