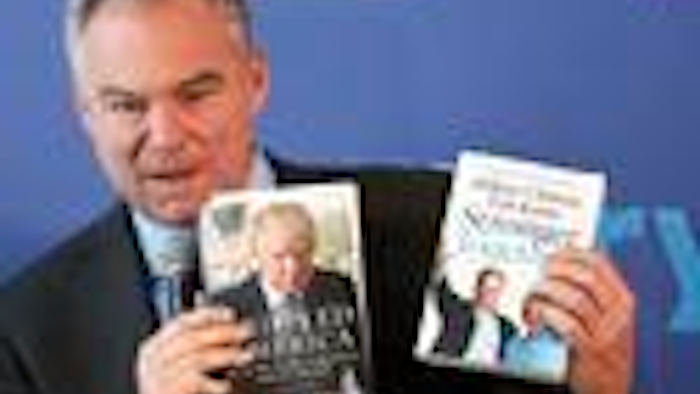 Addressing a forum in Portsmouth, New Hampshire, on Thursday, the Virginia senator said the plan Trump recently unveiled has "kind of has a 1990s feel to it. It's not 2016."

Kaine and running mate Hillary Clinton are promising 12 weeks of maternity leave for all employees. He said: "We treat everybody exactly the same, so there's no disincentive to hire women rather than men."

Kaine said that, today, men often take leave to care for children as much as women.

Hillary Clinton says she is "doing great" as she returns to the campaign trail after recovering from pneumonia.

The Democratic presidential nominee spoke briefly with reporters on her campaign plane Thursday as she headed to an event in Greensboro, North Carolina.

She did not take detailed questions, though was expected to do so later in the day.

Clinton hasn't campaigned since she became dizzy and dehydrated during a 9/11 memorial service in New York on Sunday. Her campaign later acknowledged that Clinton had been diagnosed with pneumonia on Friday.

Donald Trump is spelling out for the first time how much his plans for America's economy would cost if he's elected to the White House.

Trump says that his tax cut would cost $4.4 trillion over 10 years, including the childcare plan he announced this week.

But he says the cost would be compensated by economic growth, as well as an infusion of new money from trade, energy and regulatory reforms.

Trump also said he can save almost $1 trillion over the next decade by saving one penny from every dollar of federal spending on programs, excluding defense and entitlement programs.

Donald Trump is laying out plans to dramatically scale back government regulations, including food safety and environmental measures.

Trump says he wants to eliminate the "Waters of The United States" rule aimed at protecting the America's waterways, and scrap the Environmental Protection Agency's Clean Power Plan, which sets limits on carbon pollution from power plants.

He also wants to limit the scope of what his campaign dubbed "The FDA Food Police," which oversees food safety.

Trump has said he does not believe in climate change science.

The Republican presidential nominee outlined his plans in a speech to the Economic Club of New York in Manhattan.

House Speaker Paul Ryan says he released his tax returns and "I think we should" do so. But he said he'll defer to Donald Trump on timing.

Ryan was the Republican nominee for vice president in 2012 and released his tax returns at that time.

He made his comments in response to questions about Trump's tax returns at a news conference Thursday. Trump says he won't release his taxes while he is being audited.

Ryan said: "I released mine. I think we should release ours. I'll leave it to him when to do it."

Ryan also reiterated that he views Trump as qualified to be president.

He said: "Donald Trump won the nomination. Having a business guy as president is not the worst idea in the world, I'll say that."

Donald Trump is unveiling his economic plan on Thursday, one that promises to lower taxes, cut regulation and create job growth.

But critics have warned such proposals would stifle the U.S. economy, adding trillions in debt.

The Republican presidential nominee is set to unveil the plan in a speech to the Economic Club of New York. He vows to boost America's economy by 3.5 percent — which is well above current projections — and create 25 million jobs.

The heart of his plan is a revised tax code, which includes a pledge that no business should pay more than 15 percent of its income in taxes, a major drop from the current 35 percent corporate tax rate.

Donald Trump's campaign has released a letter from his doctor outlining the results from his latest physical.

He concludes that Trump "Is in excellent physical health."

The letter, released Thursday, is more detailed than one he had released previously that consisted largely of platitudes.

The release comes amid growing attention to the candidates' health histories and after Clinton was captured on video stumbling.

Trump's campaign appeared to refer to that episode when it said Trump "has the stamina to endure — uninterrupted — the rigors" of the campaign and presidency.

Mike Pence, his wife and oldest daughter made a quick stop Thursday at the office where he made a sports analogy for the final two months of the race.

He told the story of congressman Jim Ryun, who was the first high school student to run a mile under four minutes. Pence said Ryun told him he would always "run through the tape" and not slow down at the finish line.

Pence was to appear with Trump later Thursday for an economic policy speech in New York.

Donald Trump says that women should be able to obtain birth control without a prescription.

The Republican presidential nominee said in an interview on "The Dr. Oz Show" that some women "just aren't in a position to go get a prescription."

He said they shouldn't have to.

Trump said: "I would say it should not be prescription."

Trump says that he remains opposed to abortion rights.

The interview was taped Wednesday and broadcast Thursday.

Donald Trump says that, when he looks in the mirror, he sees a man much younger than his 70 years.

Trump spoke on "The Dr. Oz Show" in an interview broadcast Thursday.

Trump said that he sometimes plays golf with New England Patriots quarterback Tom Brady. He said that when he's with the 39-year-old Brady, "I feel I'm the same age as him. It's crazy."

Trump said that when you're running for president, "you have an obligation to be healthy" because the job requires it.

Donald Trump says that standing at a podium, delivering his signature rally speeches, is one of the ways he stays healthy on the campaign trail.

The Republican presidential nominee says that delivering his speeches is "a really healthy act." He was appearing on "The Dr. Oz Show," in an interview that was taped Wednesday and broadcast Thursday.

He said: "I guess that's a form of exercise?"

Donald Trump is suggesting that, if he's elected president, he would sell some foreign assets to avoid potential conflicts of interest.

The Republican nominee was asked during a call-in with "Fox and Friends" how he would respond to potential sanctions imposed on a country that might hurt his company or hotels.

He responded that he "would absolutely get out in some form." He said: "If it's ownership, we'd have to sell."

Trump has a long list of potential conflicts of interest thanks to his dealings with foreign companies and governments.

Trump said, if elected, he would "sever connections" with his company. His adult children and executives would run it and not discuss it with him.

Hillary Clinton says she won't comment on emails sent by former Secretary of State Colin Powell attacking her for "hubris."

She said: "I have a great deal of respect for Colin Powell and I have a lot of sympathy for anyone whose emails become public."

The emails were leaked to a website which has been alleged to be an outlet for hackers tied to the Russian intelligence groups.

Clinton said the email leak underscores efforts by the Russians to try to interfere with U.S. elections. She said she's "increasingly concerned" by what she called rival Donald Trump's "alarming closeness with the Kremlin." Trump has frequently praised Russian leader Vladimir Putin.

That's what she tells the Tom Joyner radio show in a taped interview broadcast on Thursday morning.

Clinton released a letter from her doctor on Wednesday declaring her "fit to serve" as president.

She has faced criticism about a lack of transparency after not revealing that she had been diagnosed pneumonia until a video showed her stumbling after abruptly leaving a 9/11 ceremony.

Rival Donald Trump is expected to make public more information about his health on Thursday. Clinton said he's failed to "even meet the most minimalistic standards" for disclosure.

This version of the item posted at 8:10 a.m. has been corrected to delete a reference to Clinton releasing additional health information; it was based on an interview recorded with her before she released a new letter from her doctor with updated health information on Wednesday.

Donald Trump says "something was up" with the Flint, Michigan pastor who interrupted him as he addressed her church on Wednesday.

Trump told "Fox and Friends" Thursday that he "got unbelievably good treatment" during his trip to the city.

But he said that "something was up" with the Rev. Faith Green Timmons, pastor of the Bethel United Methodist Church.

Trump said he "noticed she was so nervous when she introduced me." He said. "She was like a nervous mess."

Trump was interrupted and then heckled after he began to attack rival Hillary Clinton. The pastor approached him calmly to say she'd invited him to the church to thank the congregation, not give a political speech. Trump finished speaking shortly after.

Trump said: "Everyone plays their games, it doesn't bother me."

Donald Trump says he weighs 236 pounds — making him overweight for his height.

Trump said in a phone interview with "Fox and Friends" that he is 6-foot-3 and 236 pounds — giving him a body mass index falling into the "overweight" range.

Trump discussed the results of his physical ahead of the airing Wednesday of a taped interview with TV personality "Dr. Oz."

Trump said his health is good, though he'd like to lose 15 pounds. He said his cholesterol is "quite good" and that he had "every single test" and they are good.

He said "If they were bad, I would say, let's sort of skip this, right?"

Asked about reports that he weighs more than 236, Trump joked: "ay-ay-yi, it's bad enough."

Hillary Clinton is returning to the campaign trail following a bout of pneumonia that sidelined her for three days and revived questions about both the Democratic nominee and Republican Donald Trump's transparency regarding their health.

Clinton's campaign responded with a new letter from her doctor declaring her "fit to serve" as president and recovering well from her illness. The letter details medications she is taking, her cholesterol levels and other results from a physical exam.

Trump says he, too, plans to release details from a recent physical, though it's unclear when that will happen and how much information he will provide.

In keeping with Trump's unusual approach to transparency, he gave a one-page summary of his recent exam to Dr. Mehmet Oz while taping an episode of Oz's television show.