At Olympics, Rio draws a line when snack comes under attack

RIO DE JANEIRO (AP) — As the Olympic whirlwind sweeps through Rio and brings with it disapproval of everything from shoddy construction to water pollution, residents are drawing a line in the sand. Nobody better attack their favorite snack. They are called Biscoito Globo, and they're more than... 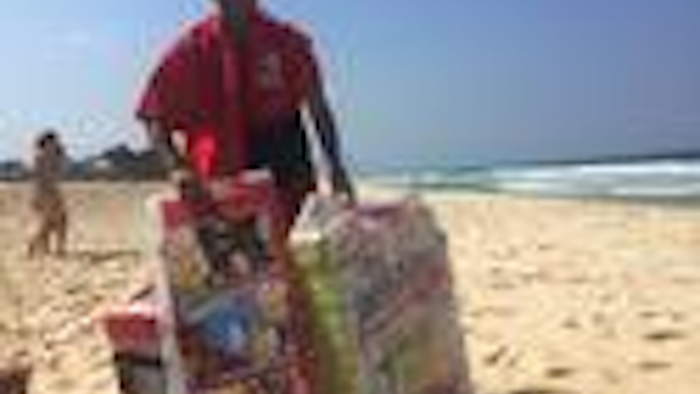 RIO DE JANEIRO (AP) — As the Olympic whirlwind sweeps through Rio and brings with it disapproval of everything from shoddy construction to water pollution, residents are drawing a line in the sand. Nobody better attack their favorite snack.

They are called Biscoito Globo, and they're more than just a snack in Rio. They are a symbol of local pride.

The starchy, puffy treats made with coconut oil, milk, water and a pinch of salt and sugar are manufactured locally and sold in paper bags by street vendors along the coast and in stores throughout Rio de Janeiro. Babies munch on them from their strollers as if they were cereal. Beach-goers nosh on them while tanning.

When a New York Times story described the crunchy rings as "flavorless" and "air turned into a doughnut-shaped wafer," locals got up in arms, taking to social media to criticize America's fast-food culture. Brazilians began sharing photos of the puffed rings. A popular one showed bags on the sand, next to a drink or sunglasses.

TV reporters sought out Olympic tourists who did Globo rings and were willing to say so on camera. Newspaper columnists jokingly likened the outrage to a diplomatic quarrel.

"How many generations of locals have grown up loving that snack? For many, including me, it's impossible to go to the beach and not have the cookie. It's so crunchy and light," said Ana Beatriz Manier, who's writing a book about the history of the Globo cracker, which dates back to 1955. She plans to include the Olympic kerfuffle.

"To hear someone speaking badly of a product that is part of the childhood of every Rio resident, of that beautiful beach scenery that makes us proud, it causes outrage," she said.

On Facebook, Brazilian columnist Mentor Neto tried to explain the secret to the rings. "It's not something for beginners," he said, echoing a phrase made popular by "The Girl from Ipanema" composer Tom Jobim: "Brazil is not for beginners."

"It must be felt on the palate and throat and not the taste buds ... it should be felt in the soul," Neto said.

"If we were a serious country, we would interrupt the Olympics today. We would cross our arms and return to work only after Obama apologizes," he joked.

Cariocas, as Rio residents are known, take the slights of foreigners personally. When U.S. goalkeeper Hope Solo irked Brazilians by sending alarmist tweets about the Zika virus, she was greeted with chants of "Zika! Zika!" every time she touched the ball. Comments about why the coffee cups and men's swimsuits are both so small in Brazil have also annoyed locals.

As for the Globo ring? "There's a whole culture around them in Brazil," said Jeanine Pires, a former president of the Brazilian Tourism Board. "They are the face of Rio."