SHORTSTOWN, England (AP) — The makers of a blimp-shaped, helium-filled airship billed as the world's biggest aircraft postponed its maiden flight at the last minute on Sunday. The 302-foot- (92-meter-) long Airlander 10 was due to take off for from an airfield 45 miles (73 kilometers) north of... 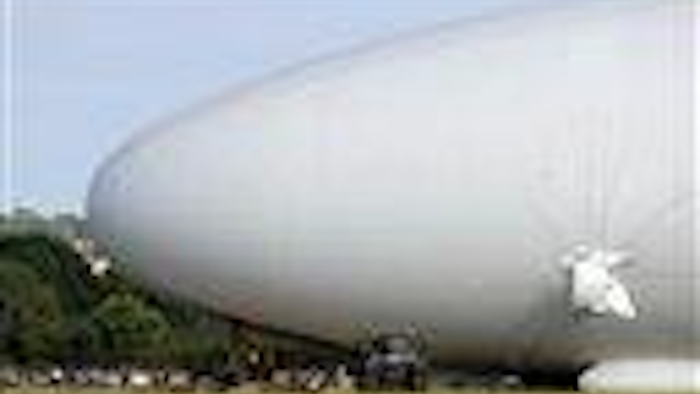 SHORTSTOWN, England (AP) — The makers of a blimp-shaped, helium-filled airship billed as the world's biggest aircraft postponed its maiden flight at the last minute on Sunday.

The 302-foot- (92-meter-) long Airlander 10 was due to take off for from an airfield 45 miles (73 kilometers) north of London on the first in a series of test flights.

Stephen McGlennan, chief executive of Hybrid Air Vehicles, said the airship had "a slight technical issue" and there's not time to fix it before darkness fell.

He didn't say when the flight might be rescheduled.

Nicknamed the "flying bum" because of its bulbous front end, the Airlander is a hybrid air vehicle — part lighter-than-air blimp, part plane. It's designed to use less fuel than a plane, but carry heavier loads than conventional airships.

Its developers say it can travel at up to 90 mph (148 kph) and stay aloft for up to two weeks.

The aircraft was initially developed for the U.S. military, which planned to use it for surveillance in Afghanistan. The U.S. blimp program was scrapped in 2013, and since then the airship's developer has sought funding from government agencies and individual donors.

The vast aircraft is based at Cardington airfield, where the first British airships were built during and after World War I. The program was abandoned after a 1930 crash that killed almost 50 people, including Britain's air minister.

That and other accidents including the fiery 1937 crash in New Jersey of the Hindenburg, which killed 35, dashed the dream of the airship as a mode of transportation for decades.

Unlike hydrogen, the gas used in the Hindenburg, helium is not flammable.

Speaking Sunday before the technical hitch, McGlennan said he was confident airships have a strong future, despite their public image as a failed 20th-century aviation experiment.

"It's a disruptive capability," he said, likening it to the electric car — a technology finally making a long-elusive breakthrough into mass use thanks to Elon Musk's Tesla.

"Something that disruptive, it's always long, and it's always a winding road," McGlennan said.