SPARKS, Nev. (AP) — It's Tesla Motors' biggest bet yet: A massive, $5 billion factory in the Nevada desert that could nearly double the world's production of lithium-ion batteries. Tesla officially opened its Gigafactory Tuesday, a little more than two years after construction began. The factory... 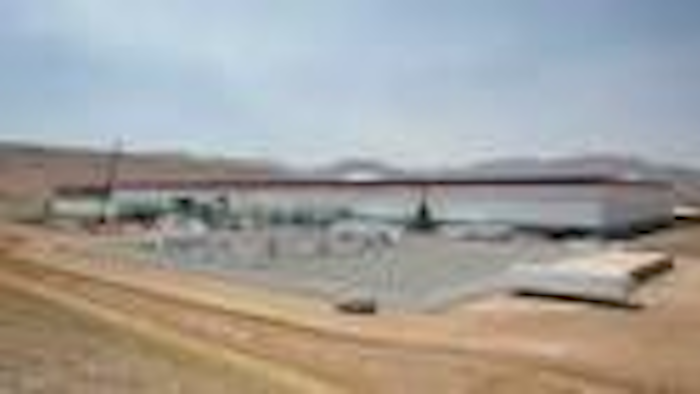 SPARKS, Nev. (AP) — It's Tesla Motors' biggest bet yet: A massive, $5 billion factory in the Nevada desert that could nearly double the world's production of lithium-ion batteries.

Tesla officially opened its Gigafactory Tuesday, a little more than two years after construction began. The factory is currently about 14 percent complete; when it's finished, it will be approximately 10 million square feet, or about the size of 262 NFL football fields. That will make it one of the largest buildings in the world.

The factory is key to the future of Palo Alto, California-based Tesla. The 13-year-old electric car company wants to transition from a niche maker of luxury vehicles to a full-line maker of affordable cars, pickups and even semi trucks. It also runs Tesla Powerwall, a solar energy storage business for homes and businesses. The company says making its own lithium-ion batteries, at the scale the Gigafactory allows, will reduce its battery costs by more than a third.

The name stems from "giga," a unit of measurement that represents billions. One gigawatt hour is the equivalent of generating one billion watts for one hour_one million times that of one kilowatt hour. Tesla says the factory will be producing 35 gigawatt hours of batteries by 2018; that's equivalent to the entire world's production in 2014. Tesla CEO Elon Musk has said the factory has the capacity to produce 150 gigawatts if it ever needs to.