WARSAW, Poland (AP) — Only 160 miles (250 kilometers) north of Warsaw, where NATO begins a two-day summit Friday, lies the Russian region of Kaliningrad, the most militarized plot of land in Europe — and one of the catalysts for a planned build-up of forces by the Western military alliance on its... 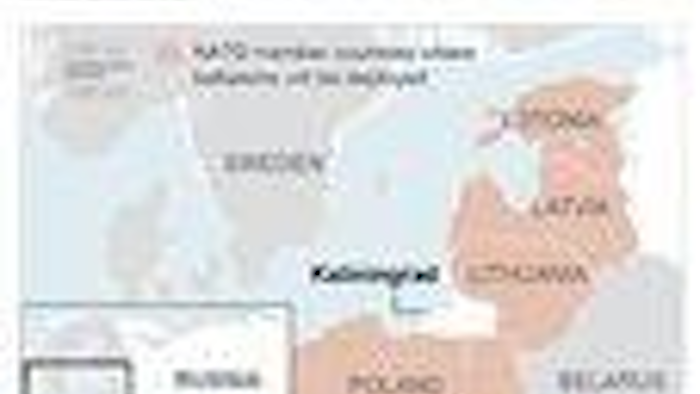 WARSAW, Poland (AP) — Only 160 miles (250 kilometers) north of Warsaw, where NATO begins a two-day summit Friday, lies the Russian region of Kaliningrad, the most militarized plot of land in Europe — and one of the catalysts for a planned build-up of forces by the Western military alliance on its eastern flank.

Though small — about the size of Connecticut — Kaliningrad will loom large for leaders at the Warsaw summit, where they are set to finalize plans to deploy four battalions of some 1,000 soldiers each to Poland, Estonia, Latvia and Lithuania — the NATO nations most fearful of a resurgent Russia after Moscow's incursions in Ukraine.

Wedged between NATO members Poland and Lithuania and the Baltic Sea, Kaliningrad is vital to Russia's strategic position. Separated from the Russian mainland by about (435 miles) 700 kilometers, it is the westernmost part of Russia and houses the Russian Baltic Fleet, as well as multiple land forces and an air force detachment with fighters, bombers and helicopters, as well as an early-warning radar system and other equipment.

It was Russian jets from Kaliningrad that buzzed a U.S. warship in the Baltic Sea and barrel-rolled a U.S. Air Force reconnaissance plane earlier this year, incidents Washington denounced as dangerous and provocative.

Now NATO military and civilian leaders fear that Russia is using Kaliningrad to create what is known as an anti-access/area denial (or A2/AD) bubble, using systems like surface-to-air missile batteries to deny NATO access to certain areas in its own territory in the event of a conflict.

"There was no reason to be very concerned five years ago when you could count on more or less peaceful behavior of the Russian side," said Igor Sutyagin, a research fellow in Russian studies at the Royal United Services Institute in London. "Now it's becoming more and more possible that these forces could be used, and this is reason for concern."

Prior to World War II, Kaliningrad was Koenigsberg, a northern district of what was then East Prussia, home of the 18th-century philosopher Immanuel Kant, and a grain, dairy and meat supplier to the rest of Germany. At the end of World War II the province fell to the Soviet Union; the 1.2 million Germans living there were expelled and the Baltic province was repopulated by Soviet citizens and became a garrison area and missile depot for the Red Army.

Today it is the world's largest amber producer. Despite the military divide, its population of about 1 million people engages in heavy trade with its European neighbors, with Russians traveling to Poland to shop for groceries and buy furniture at IKEA, and Poles going into Kaliningrad to buy cheaper cigarettes, gasoline and alcohol.

Lukasz Kulesa, research director at the European Leadership Network, a London institute focused on defense matters, said the long list of military units based in Kaliningrad looks impressive on paper, "but they are not always equipped with the best and latest weapons."

Now, however, there are signs that Russia is improving and reinforcing its units there in response to recent NATO military exercises in the region, the NATO buildup and the U.S.-backed missile-defense site in Poland.

Shoigu said that NATO's moves have prompted Russia to take countermeasures. Russia's Baltic Fleet has received new ships and other weapons and the military has formed a new army corps to support it.

During last year's military maneuvers, the Russian military also airlifted its state-of-the-art Iskander missiles to the Kaliningrad region in a show of its rapid-deployment capability.

The Iskander, which can be equipped with a conventional or a nuclear warhead, has a range of 500 kilometers (310 miles), placing most of Poland within reach.

While the Russian military said that the Iskander missiles were pulled back to their home base elsewhere in Russia following the maneuvers, Russian officials in the past have said that the missiles could be permanently stationed in the Kaliningrad region to counter NATO's missile-defense program.