ISTANBUL (AP) — As the death toll from the Istanbul airport attack rose Thursday to 44, a senior Turkish official said the three suicide bombers who carried it out were from Russia, Uzbekistan and Kyrgyzstan, and Turkish police raided Istanbul neighborhoods for suspects linked to the Islamic State... 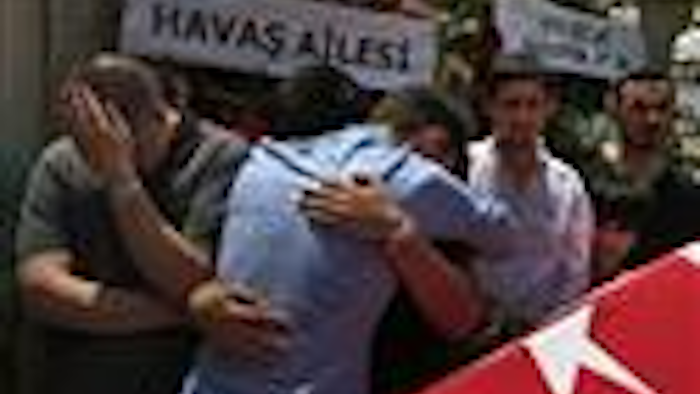 ISTANBUL (AP) — As the death toll from the Istanbul airport attack rose Thursday to 44, a senior Turkish official said the three suicide bombers who carried it out were from Russia, Uzbekistan and Kyrgyzstan, and Turkish police raided Istanbul neighborhoods for suspects linked to the Islamic State group.

Turkish authorities say all information suggests the Tuesday night attack on Ataturk Airport, one of the world's busiest, was the work of IS, which boasted this week of having cells in Turkey, among other countries.

Police raided 16 locations in three neighborhoods on both the Asian and European sides of the city that sprawls across the Bosporus Strait, rounding up 13 people suspected of having links to IS.

There was no immediate claim of responsibility by the militant group, which has used Turkey to establish itself in neighboring Syria and Iraq. IS has repeatedly threatened Turkey in its propaganda, and the NATO member has blamed IS for several major bombings in the past year in both Ankara and Istanbul.

Across Istanbul and beyond, funerals were held for the airport victims Thursday, and heartbroken families sobbed as they bid their loved ones farewell, including several local airport workers.

Nilsu Ozmeric wept over the coffin of her fiance, Jusuf Haznedaroglu, a 32-year-old airport worker who was fatally wounded while waiting for a bus to go home.

"The wedding was next week," sobbed his mother, Cervinye Haznedaroglu, as visitors offered condolences.

A video obtained by the Turkish newspaper Haberturk purported to show a police officer asking one of the suicide bombers for identification before he was subsequently shot by the attacker. The video shows the alleged police officer, in short sleeves, approaching a man dressed in black. The man in black then appears to shoot the officer, who falls to the ground. The Associated Press was not able to independently verify the location of the video or the sequence of events.

A Turkish senior official, who spoke on condition of anonymity because government regulations did not authorize him to talk to the media, said the attackers were from Russia and the Central Asian nations of Uzbekistan and Kyrgyzstan.

A medical team was working around the clock to identify the suicide attackers, the official said, noting their bodies had suffered extensive damage.

Kyrgyzstan's Foreign Ministry denied that an attacker came from that country. Asked about the possible involvement of a Russian in the attacks, Kremlin spokesman Dmitry Peskov said he had no information on that and there was no comment either from Uzbekistan.

Russian President Vladimir Putin has said between 5,000 and 7,000 people from Russia and other nations of the former Soviet Union have joined the Islamic State group in Syria and Iraq. People from Chechnya and other provinces in Russia's volatile North Caucasus region have had a visible presence among Islamic State fighters.

Turkish state media said the death toll in the attack rose to 44 after a 25-year-old airport worker succumbed to his wounds. Interior Minister Efkan Ala said the dead included 19 foreigners. Officials said 94 of the over 230 people reported wounded in the attack were still hospitalized.

Two memorial services for victims were held at the airport, one of them honoring taxi drivers slain in the attack. Five funerals were held elsewhere, including for four members of the Amiri family.

Abdulmumin Amiri escaped death because he went to look for a taxi while his relatives watched their luggage. "At that time, the bomb went off," he told The Associated Press. "I was about four or five meters (13 to 16 feet) away."

At the funeral for Ferhat Akkaya, who had gone to the airport to see off a friend, his wife and three children sobbed as they clutched his coffin in the northern province of Ordu. His relatives railed against Turkish authorities, blaming them for failing to ensure airport security.

"Damn it! The state should hear our voices and take the necessary precautions," said Ferhat Kabakci, the victim's brother-in-law. "Now a widow and three orphans have been left behind. Who will look after them?"

In Paris, the Eiffel Tower was illuminated in the red-and-white colors of the Turkish flag to honor the victims in Istanbul.

The U.N. Security Council condemned the attack, saying that any acts of terrorism are criminal and unjustifiable and are "one of the most serious threats to international peace and security."

Unconfirmed details about the attack flooded Turkish media. The private Dogan news agency said the Russian attacker had entered the country one month ago and left his passport in a house the men had rented in Istanbul's Fatih neighborhood.

The Karar newspaper, quoting police sources, said the attackers were part of a seven-member cell that entered Turkey on May 25. The assailants raised suspicions of airport security on the day of the attack because they wore winter jackets on a summer day, media reported.

Police officer Yasin Duma, meanwhile, was praised as a hero. He was wounded in an exchange of gunfire with one of the attackers and reportedly saved many lives by shouting "Bomb!"

Turkey's interior minister said the explosives used were a mix of RDX, TNT and PETN that were "manufactured." That combination is military-grade, raising the question of how the attackers obtained the bombs, said Jimmie Oxley, a chemist and explosives expert at the University of Rhode Island.

The Dogan news agency broadcast video of the Istanbul police raids showing a special forces team carrying what appeared to be a steel shield to protect themselves as they entered a building.

In separate police operations, nine suspects believed to be linked to the IS group were also detained in the coastal city of Izmir. It was not clear if the suspects had any links to the airport attack but the report said they were in contact with IS militants in Syria and were engaged in providing financial resources, recruits and logistical support.

On June 25, Turkish security forces killed two suspected IS militants trying to cross the border illegally after they ignored orders to stop, local media reported. One of the militants was wanted on suspicion he was planning a suicide attack in Ankara or the southern city of Adana, Anadolu said.

Turkey's leaders tried project an air of normalcy amid the airport investigation and the funerals, appearing Thursday at the opening of a suspension bridge in northwest Turkey.

President Recep Tayyip Erdogan, speaking at the ceremony, made a vague reference to the "forces" that don't want his country to succeed — including the separatist Kurdistan Workers' Party, or PKK, the Syrian Kurdish militia YPG and the Islamic State group.

"They have been let loose against us by the forces who hold their leashes," Erdogan said, warning that "the bombs that explode in our country today will tomorrow explode in the hands of those who sent them."