ALBANY, N.Y. (AP) — A federal investigation of two former top aides to Gov. Andrew Cuomo is threatening to taint the Democratic leader's signature economic development efforts even as it adds to Albany's reputation for insider dealing. The probe has revealed a complex web of individuals tied to... 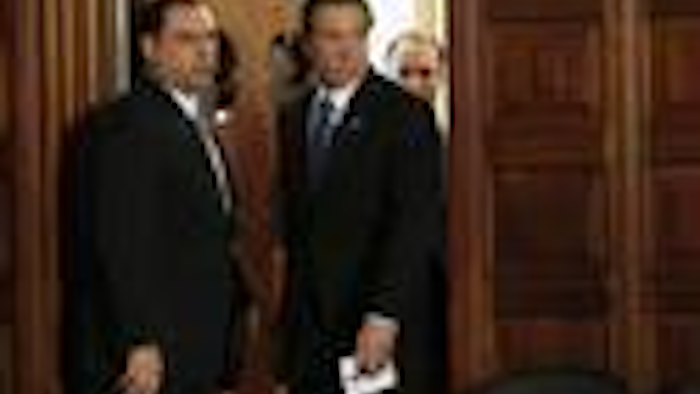 ALBANY, N.Y. (AP) — A federal investigation of two former top aides to Gov. Andrew Cuomo is threatening to taint the Democratic leader's signature economic development efforts even as it adds to Albany's reputation for insider dealing.

The probe has revealed a complex web of individuals tied to Cuomo and businesses that stand to make millions through efforts to revitalize the upstate economy. Cuomo has launched his own internal investigation and vowed to "throw the book" at anyone found to have broken the law.

"Did two people act improperly? Did they represent companies they shouldn't have? Was their undue influence with those companies?" Cuomo told reporters Tuesday. "Those are the questions. We now need the answers."

In response, Cuomo announced hiring Bart Schwartz, formerly head of the U.S. attorney's criminal division in Manhattan, to lead an internal investigation and report any findings to Bharara's office.

"I don't want to comment on ongoing investigations but we're in the middle of it, and I don't want to prejudge it," Schneiderman told reporters last week.

Attorney Richard Strassberg, representing SUNY Poly, told the newspaper the school and its affiliates have cooperated fully with the investigation that began last September and have seen no evidence of any impropriety.

Joseph Percoco was long known as one of Cuomo's most loyal advisers, a political enforcer who worked for his father, Gov. Mario Cuomo. During the eulogy for his father last year, Cuomo called Percoco his father's third son "who sometimes I think he loved the most."

Percoco was Cuomo's $156,000-a-year executive secretary when he resigned in 2014 to lead Cuomo's re-election campaign. According to state financial disclosures he also made as much as $125,000 by becoming a consultant for COR Development and CHA Consulting, two firms involved in Buffalo Billion and Nano. The firms are also big Cuomo political donors.

Cuomo said Percoco told him he might take consulting clients. But he never asked Percoco to identify them.

A COR spokeswoman, however, disputed Percoco's claim that he was worked for the company, saying he wasn't hired, retained or paid in any capacity.

Percoco rejoined the administration in late 2014 and received a $20,000 raise from his old salary before quitting a second time in January to become a vice president at Madison Square Garden.

"As a policy, we do not comment on employees, but we can say that Joe is a man of good character and is a respected executive at MSG," the company said in a statement emailed to The Associated Press.

Todd Howe's ties to the Cuomo family also stretch back decades. He was an aide to Mario Cuomo and later a deputy chief of staff to Andrew Cuomo when the latter led the U.S. Department of Housing and Urban Development. He later went to work as a lobbyist for a firm whose clients included COR, developer LPCiminelli, energy company CPV Valley and SUNY Polytechnic.

Howe has a troubled financial history, first detailed by The New York Times, including a 2003 bankruptcy, nearly $400,000 in federal tax liens and judgments and a guilty plea to a felony theft charge after he was accused of making a false bank deposit of $45,000.

"I wouldn't call us close friends," Cuomo said of Howe. "But he worked for the state for a number of years. But I had no knowledge of his personal situation."

Attorneys for Percoco and Howe did not respond to messages seeking comment for this story.

Cuomo regularly cites the Buffalo Billion, a plan to invest $1 billion in the city of Buffalo, and Nano as two of his proudest achievements, and the questions surrounding the programs now threaten to stain that legacy.

COR, based in Syracuse, was chosen to work with SUNY Poly on the construction of nanotechnology centers in central New York.

CHA, an Albany-based engineering firm, did work on the SolarCity solar panel manufacturing facility, the state's largest single investment in the Buffalo Billion project. LPCiminelli is the main contractor building the plant.

Michael McGovern, the lawyer representing CHA, said in a statement that the company is "cooperating fully" with Bharara's investigation. "It is our understanding that we are not a target of the investigation," McGovern said.

Another Howe client, Competitive Power Ventures, building a 650-megawatt gas-fired power plant in Orange County, said it's complying with federal prosecutors' request for information "related to past engagements with a small number of consultants." Thomas Rumsey, CPV vice president, said this week that the project is privately funded, with no state money.

The administration has since advised state utility and environmental regulators to stop all communications with CPV, citing the ongoing federal investigation. Separate letters instructed administration officials not to communicate with Howe and ordered SUNY Polytechnic to run any Buffalo Billion and Nano decisions by Schwartz as the investigation continues.

"Nobody wants the facts more than us," Cuomo said.