Some howl over Alibaba's place in anti-counterfeiting group

SHANGHAI (AP) — The prospect of sitting in a Hyatt Regency ballroom in Florida and listening to Jack Ma, founder of Chinese e-commerce giant Alibaba, deliver the keynote for the International Anti-Counterfeiting Coalition's conference this month did not sit well with Michael Kors' general counsel.... 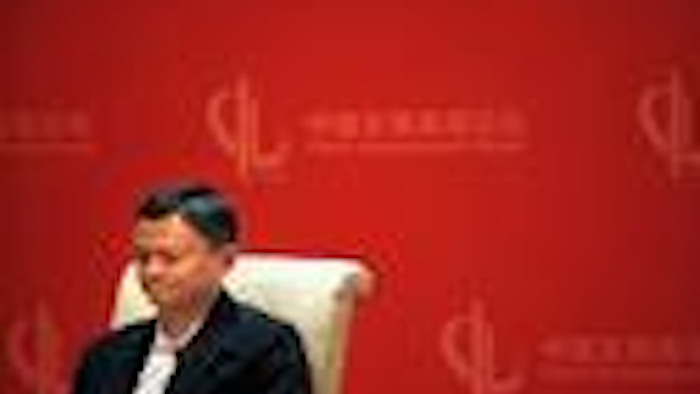 SHANGHAI (AP) — The prospect of sitting in a Hyatt Regency ballroom in Florida and listening to Jack Ma, founder of Chinese e-commerce giant Alibaba, deliver the keynote for the International Anti-Counterfeiting Coalition's conference this month did not sit well with Michael Kors' general counsel. In fact, Ma's imminent speech — and the IACC's April decision to welcome Alibaba as a new member — so incensed the U.S. luxury brand that it severed its longstanding connection with the Washington-based industry group.

"IACC has chosen to provide cover to our most dangerous and damaging adversary," Lee Sporn, general counsel for Michael Kors, wrote in an April 21 letter to the IACC executive board. Sporn said employees would be banned from attending IACC events as long as Alibaba is a member, and ordered the brand's name scrubbed from all IACC materials.

The letter offers a rare glimpse of the deep loathing one of China's most successful global companies can provoke. The controversy sparked by Alibaba's inclusion in the IACC, which counts Apple, 21st Century Fox and Procter & Gamble among its more than 250 members, calls fresh attention to the role Alibaba plays in the multibillion-dollar global counterfeiting industry — a question that has become more pressing as the company pushes to take its e-commerce juggernaut global.

To supporters, Alibaba embodies the best of Chinese capitalism, providing livelihoods to multitudes of entrepreneurs who set up shop on the company's e-commerce platforms. For many, Ma is a folk hero, a self-made billionaire who couldn't get a job at Kentucky Fried Chicken but managed to transform an idea hatched in his modest living room into the largest IPO in history. Detractors, however, say he built his empire on a foundation of fakes, and that his U.S.-listed company continues to facilitate large-scale, global criminal enterprise.

"Alibaba's strategy has consistently been to provide lip service to supporting brand enforcement efforts, while doing as little as possible to impede the massive flow of counterfeit merchandise on its platforms," Sporn wrote in the letter, first reported by The Wall Street Journal last week and obtained by The Associated Press. "By admitting Alibaba as a member and applauding Mr. Ma's appearance at the Spring Conference, you give Mr. Ma a powerful tool to speak to brand owners and regulators about his efforts to work collaboratively and effectively with brand owners — in the experience of many of your members a shockingly brazen lie."

Alibaba on Thursday reported $3.7 billion in quarterly revenue, a 39 percent jump from the prior year period, and a whopping 423 million active buyers a year. It maintains that it diligently fights fakes, employing hundreds of full-time anti-counterfeiting staff and spending tens of millions to purge its platforms of counterfeit goods.

Alibaba said in an emailed statement that IACC membership would allow it to work more closely with brands to enforce intellectual-property rights.

"The war against counterfeits can only be won when all industry players join forces," Alibaba said. "We are part of the solution."

But frustration with Alibaba's anti-counterfeiting efforts has been building.

In December, the United States Trade Representative warned it was "increasingly concerned" that large quantities of counterfeit goods are still sold through Alibaba's platforms and that enforcement operations are too slow, difficult and opaque. Some brand owners go even further. Gucci America— also a member of IACC — alleges in a lawsuit that despite Ma's tough talk on fakes, the sale of counterfeit goods is, in fact, part of Alibaba's core business. Alibaba dismisses the case as "wasteful litigation." The Kering Group, which includes Gucci, declined to comment.

"Alibaba can be a force for evil or a force for good," said Dan Plane, a director at Simone IP Services, a Hong Kong law firm that is also a member of the IACC. "If you don't let them in the room and hold their feet to the fire," he added, "you're missing an opportunity."

Still, he conceded, "It's taking a risk. You can imagine people bringing rotten eggs and tomatoes to the event with Jack Ma and saying, 'Do you know how much you're costing us each year?'"

The IACC board, in an April 29 letter to members obtained by the AP, noted that it created a special category of membership for Alibaba, which is subject to annual review and is barred from holding leadership roles or voting.

The board wrote that the intellectual-property community and Alibaba "are keenly aware that the platforms' problems remain severe." It said Alibaba's membership "is an acknowledgement of a mutual commitment by the IACC and Alibaba to continue their engagement to find effective solutions to rights-holders' concerns."

Alibaba is already a member of the International Trademark Association, which says it has more than 6,700 members — including Michael Kors, which declined to comment for this story.

Alibaba "hired a lobbyist and are giving speeches, they're joining organizations. That's progressive, but it's also smoke," said Rick Helfenbein, president of the American Apparel and Footwear Association, which has lobbied U.S. authorities to sanction Alibaba. "They have yet, in our eyes, to exhibit the will" to fight counterfeiting, he said. "Anything else they do really doesn't much matter."

The French intellectual property protection group Unifab has also expressed doubts about IACC's decision to admit Alibaba, though the group did invite Jack Ma to speak at a conference in February. Alibaba ended up sending Matthew Bassiur, head of global intellectual property enforcement, instead.

Unifab's director general, Delphine Sarfati-Sobreira, said her members were still waiting for "convincing results further to the promises made by Alibaba."

The IACC says it vets members, but a second controversial company has found its way onto the membership roster: Sinofaith IP Group. Three of the investors in the Shanghai-based investigations company were at the center of a 2009 lawsuit brought by Swiss power technology giant ABB Asea Brown Boveri, the AP showed in an investigation last year .

Before joining Sinofaith, the men were top executives at an investigations company called China United Intellectual Property Protection Center. China United employed a woman who was caught selling fake ABB circuit breakers — even as she accepted money from ABB for anti-counterfeiting work. Chinese judges acknowledged the double-dealing but exonerated upper management, and ABB lost the suit. China United closed after the litigation, and its principals went on to invest in and help run Sinofaith, according to corporate filings.

Sinofaith also advertised as clients major brands including GE, Toyota, 3M and Nike, which had not given the firm permission to use their name or no longer worked with the company, the AP found.