INGOLSTADT, Germany (AP) — To some it's the real deal, to others it's a bland brew, but thanks to a 500-year-old rule everybody can be sure what's in German beer. Chancellor Angela Merkel was among those toasting the anniversary Friday of a law that allowed only water, hops and malt as... 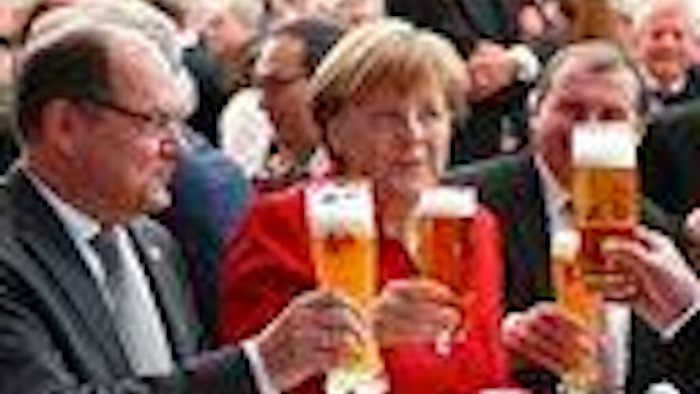 INGOLSTADT, Germany (AP) — To some it's the real deal, to others it's a bland brew, but thanks to a 500-year-old rule everybody can be sure what's in German beer.

Chancellor Angela Merkel was among those toasting the anniversary Friday of a law that allowed only water, hops and malt as ingredients — yeast was added to the list later.

Praising the law at a ceremony in Ingolstadt, southern Germany, Merkel half-jokingly quoted religious reformer and bon vivant Martin Luther, who said that "he who has no beer, has nothing to drink."

Records have that in 1516 Duke William IV of Bavaria signed a beer purity law in the city that was eventually adopted throughout Germany. It's still on the books, albeit with some exceptions, today.

The law originally stipulated that only barley should be used for beer. Other grains, such as wheat, were considered too valuable as food to be turned into beverages, according to Nina Anika Klotz, editor of beer magazine Hopfenhelden.

Another argument was consumer protection: brews that contained ingredients such as fungus and herbs sometimes had "quite undesirable results," said Klotz.

Critics say the so-called Reinheitsgebot — whose name means divine commandment in German — is little more than a marketing trick dreamed up in the early 20th century to promote German beer against foreign competitors.

While brewers in neighboring Belgium merrily make beers containing coriander and orange peel, for example, such ingredients are theoretically "verboten" in Germany. This has proved particularly frustrating for a young guard of craft beer enthusiasts trying to break into the German market.

But some old-fashioned brewers feel stifled by the law, too.

Helmut Fritsche, owner of Klosterbrauerei Neuzelle brewery some two hours west of Berlin, started what became known as the Brandenburg Beer War after authorities ruled that his black beer was illegal because it contained sugar.

"We fought for ten years," he said. "Fought with the federation of brewers, with the state government, until the highest administrative court in 2005 decided that our black beer, that includes a pinch of sugar, could be called beer."

Fritsche now brews many beers with added natural ingredients, such as cherries, asparagus and even potatoes.

"What do we want beer as a product to represent? We want it to represent flavor. And we shouldn't inhibit the variety of flavors. Of course we should never add ingredients that are dangerous to humans," he said.

Fresh ideas may be needed if German brewers don't want their income to dry up.

While Germans are still ranked second — just after the Czechs — annual beer consumption per capita has fallen from 141 liters in 1991 to 98 liters last year.

At least one novelty seems to have the blessing of mainstream breweries, though. Last year, the share of alcohol-free beer rose to 5.6 percent from 5.4 percent in Germany thanks to its growing popularity among consumers.