Tesla's 4Q net loss doubles but shares up on outlook

DETROIT (AP) — Tesla Motors posted its 11th straight quarterly loss Wednesday, and its results badly missed Wall Street's forecasts. But the electric car maker's shares soared anyway on news that its lower-priced Model 3 sedan is on schedule to be released next year. Tesla said it will unveil the... 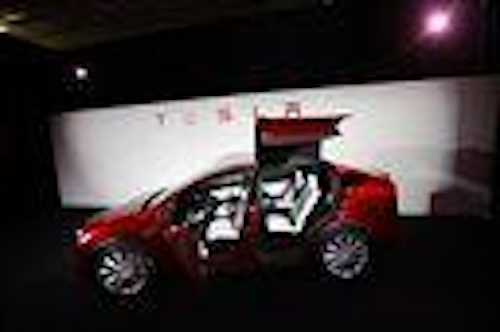 DETROIT (AP) — Tesla Motors posted its 11th straight quarterly loss Wednesday, and its results badly missed Wall Street's forecasts. But the electric car maker's shares soared anyway on news that its lower-priced Model 3 sedan is on schedule to be released next year.

Tesla said it will unveil the much-anticipated $35,000 car on March 31 and expects to start production at the end of 2017.

Tesla's shares had fallen in recent days as investors worried that the Model 3 would be delayed. Investors also weren't happy with the slow ramp-up of Tesla's new Model X SUV. The company delivered only 206 SUVs in the fourth quarter and it curtailed production last month to work out some quality issues.

But Tesla said Wednesday that it's accelerating Model X production and expects to produce 1,000 SUVs per week by the second quarter.

Tesla shares rose 13 percent in after-hours trading to $163.07. They are down 40 percent this year through the close of regular-session trading Wednesday.

In the fourth quarter, Tesla's net loss more than doubled to $320 million, hurt by the lower-than-planned Model X production. The loss, of $2.44 per share, compared to a loss of 86 cents per share in the same quarter a year ago.

Tesla said revenue rose 27 percent to $1.2 billion for the fourth quarter as worldwide deliveries of its Model S sedan increased by more than 70 percent.

For the full year, Tesla's revenue rose 26 percent to $4 billion.